Do you consider yourself to be a great interior designer? One woman really took her home-decorating expertise to a whole new level when she proved that when you put your mind to something, the possibilities are endless! 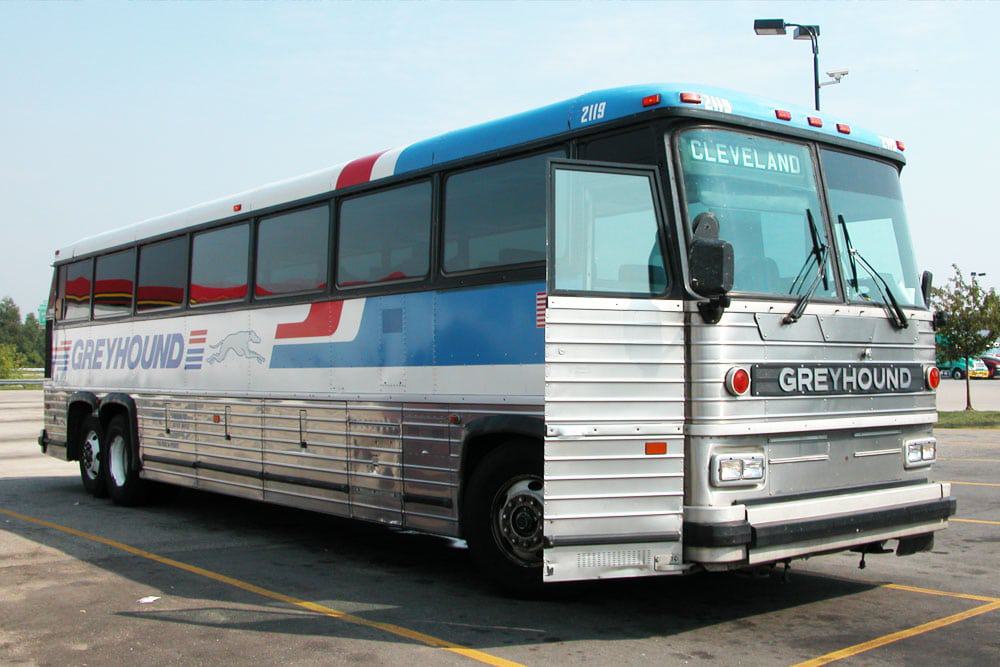 One day Jessie Lipskin came across an old bus online, she immediately felt a surge of creative inspiration and began to come up with a plan. The results of how Jessie transformed the bus into an actual home have stunned us all.

While most people use online real estate to find their dream property, Jessie opted for a slightly “different,” more eco-friendly option. Have you have thrown an eBay auction to get rid of a few clothes you could no longer use? It turns out that the e-commerce site also much larger merchandise as well. 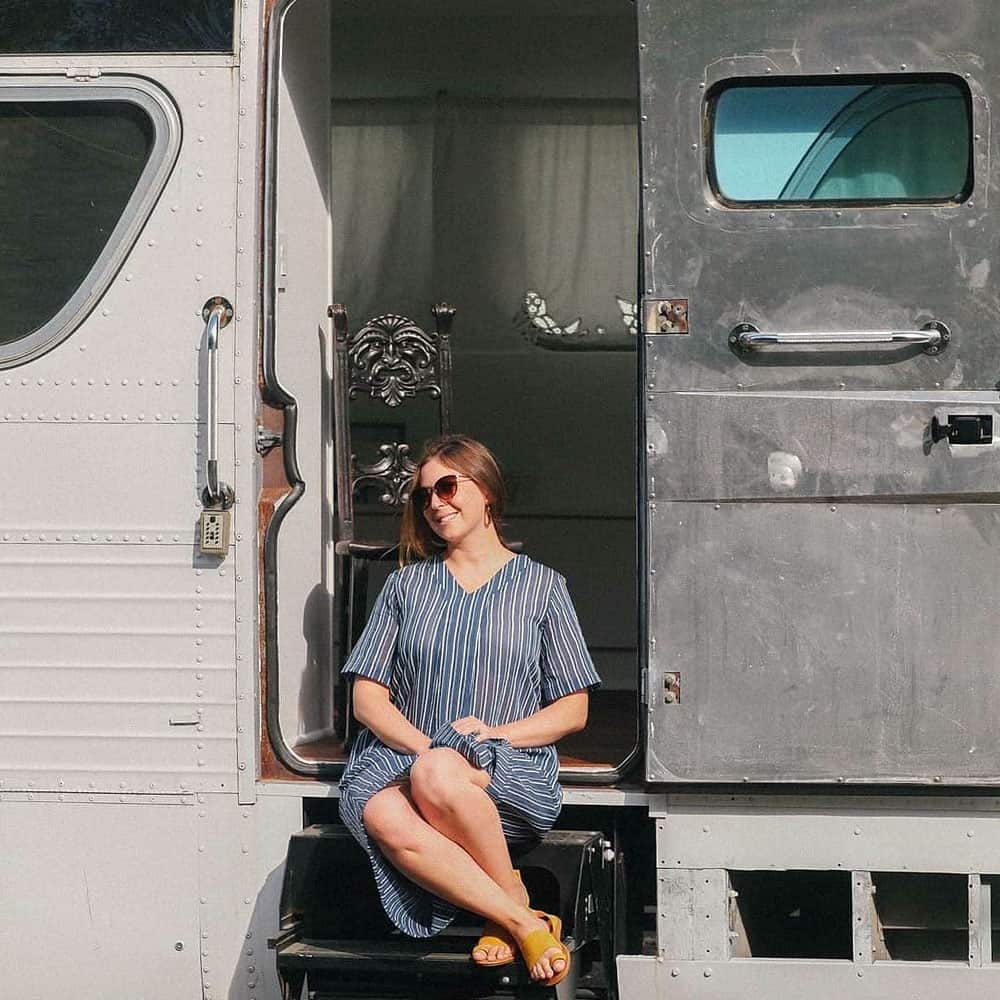 You heard it here first folks! Jessie bought her new home on eBay. Before you completely laugh off the idea, check this out. The 30-year-old New Yorker was casually browsing the website before she spotted something that caught her eye. No, it wasn’t jewelry, a new mountain bike, or kitten shaped salt and pepper shakers. Instead, it was an ad for a 1966 GMC Greyhound bus, and for Jessie, it was love at first sight!

For those thinking that this must have been an incredibly complicated process, Jessie actually had a very clear gameplan for making this happen. She could have easily chosen a conventional RV designed with all the commodities built-in. But, while this approach would have been much simpler, it lacked a little something that she was looking for. 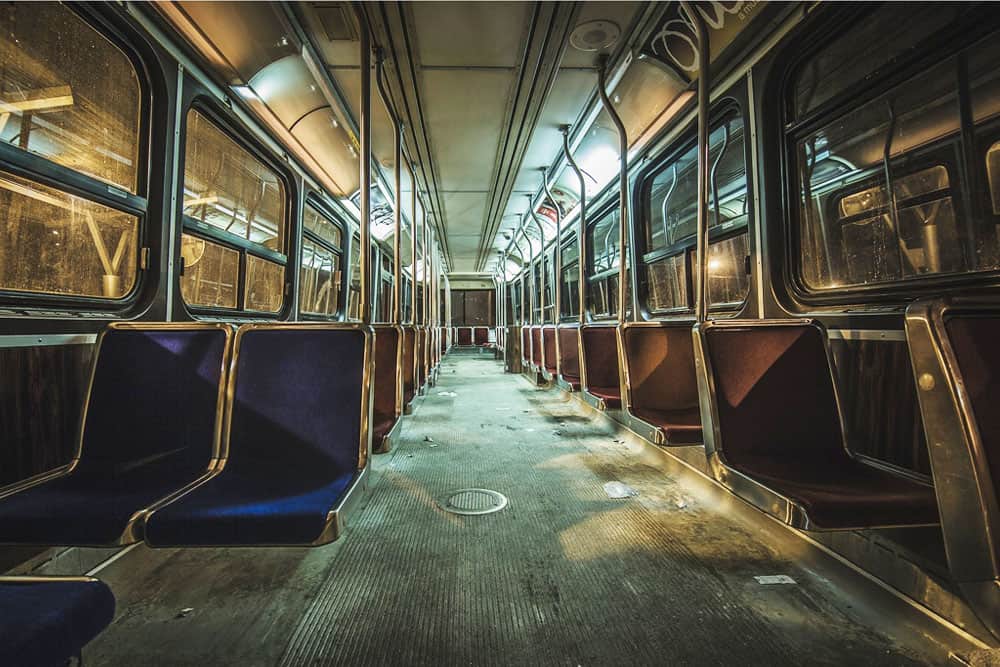 So what did a 1966 Greyhound bus have that an RV didn’t? The answer was simple. Style.

Jessie wanted a simplistic lifestyle, but also wanted it to look good! An RV didn’t have the right aesthetic she was going for, at least with the bus she had the freedom to remake it into her own personal vision. Believe us. It looked much better than this once she was finished.

You might say Jessie was hoping to set trends after choosing a retro passenger bus for her new abode. Another recent trend taking the country and housing market by storm has been the tiny home movement. Realtors everywhere better take note of this new trend, or they may soon be out of a job! 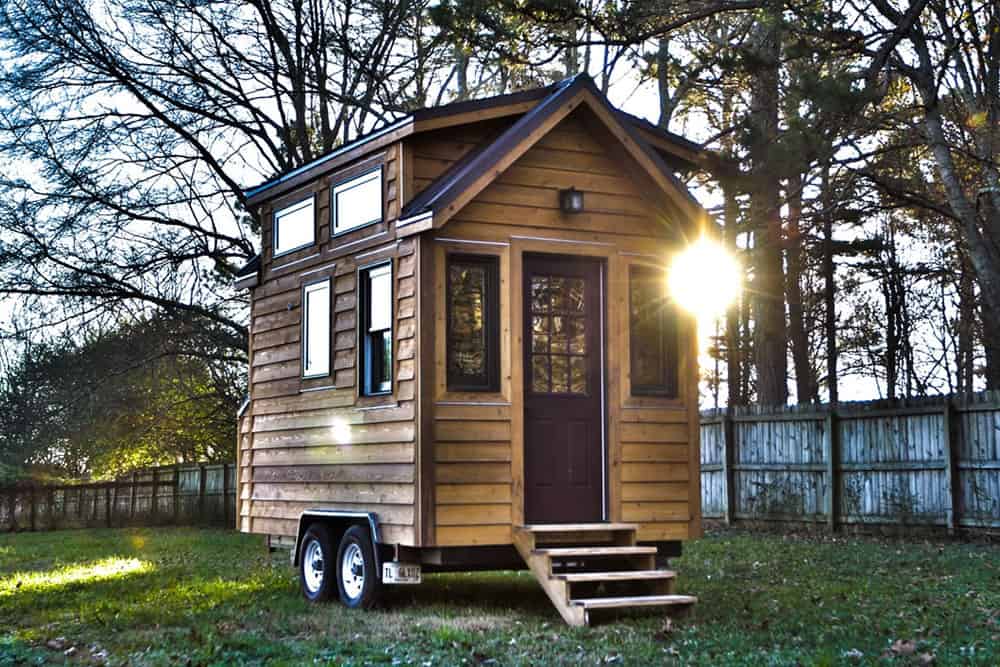 This shiny new social movement is encouraging people to downsize and simplify their living conditions. Why? People are choosing to save money on grand properties, which allows for more spontaneous, adventure-filled living. Just imagine how much money you’ll have leftover to do all the things you love!

Sure, Jessie was drawn to the idea of having some extra dough left over to spend on whatever she wanted, but there was an overriding factor in her decision to make the switch over to a mobile lifestyle. It all started one day after she watched a particular documentary. 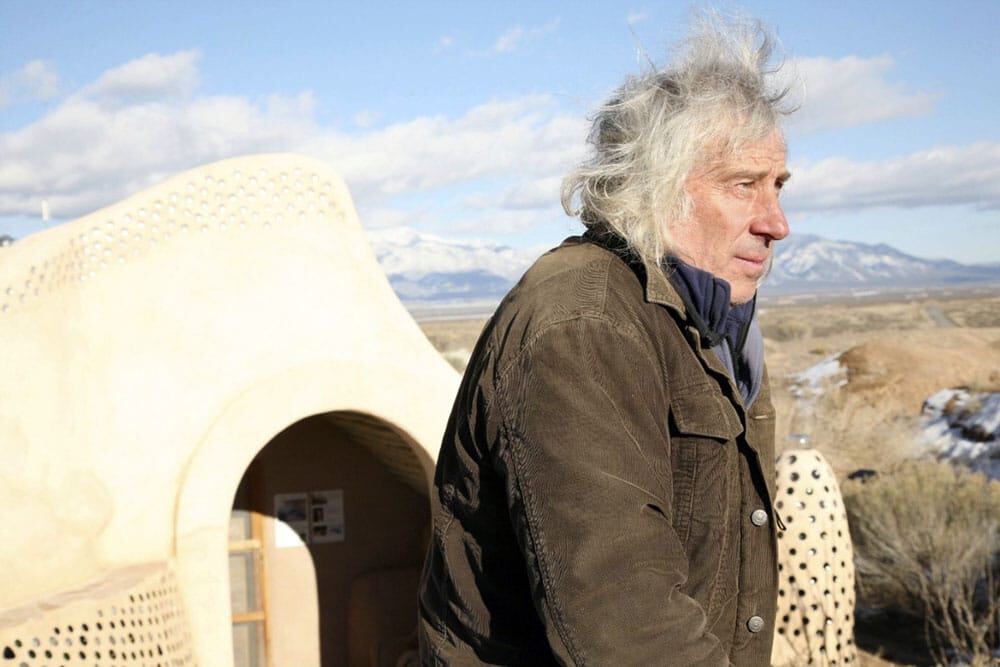 Garbage Warrior focuses on architect Mike Reynolds and his journey towards a more free and sustainable lifestyle. How does he do this? Reynolds invents eco-friendly Earthship homes. These shelters are made from natural, unused materials. The minute Jessie finished watching this, she knew in her soul that she needed to follow suit.

She Didn’t Want to Settle.

So, Jessie was clearly in love with the concept of a more eco-friendly lifestyle, but something else pointed her in the direction of getting a mobile home. Working a full-time job in finance had Jessie thinking that there had to be more to life than spending all day in an office. What she needed was a little more adventure in her life! 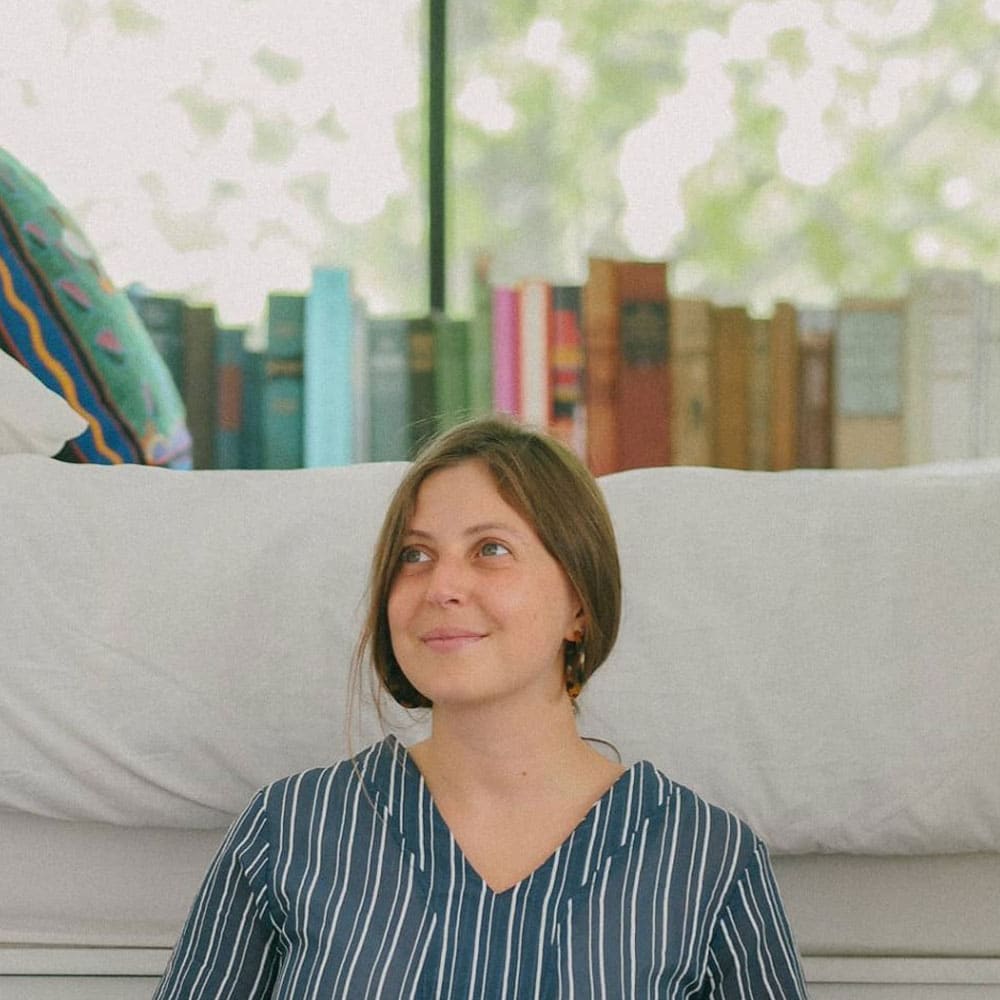 You could say that a house on wheels was the answer to all of Jessie’s problems. She now had a place that allowed her to move about as she pleased while cutting back on unnecessary commodities that were harming the environment. It was a win-win solution!

So, let’s take a closer look at the process. While some of you eBayers may have seen an old and broken-down vehicle that sticks out like a sore thumb, Jessie saw raw potential. Ok, so the bus may have had its fair share of dents and scratches, but this wasn’t something Jessie couldn’t fix. 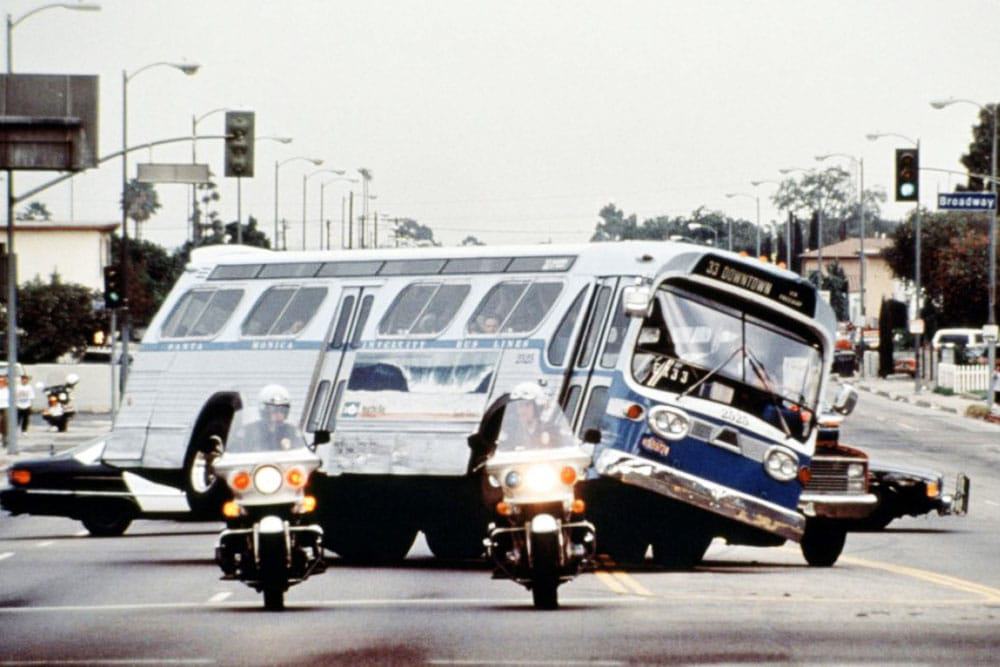 She also wanted to avoid the hustle and bustle of the busy New York real estate market, and boy did she succeed! Although Jessie wasn’t looking for something too fancy, she was thrilled to discover that this exact model of the bus was used in Keanu Reeves’ 1994 movie, Speed. How cool is that?

So how much did Jessie end up spending on her vintage, famous Hollywood bus? $7,000. I know It’s crazy to think that this New Yorker’s home costs less than many designer handbags, and certainly less than a new vehicle a quarter of its size! Now that’s what we call smart spending! Jessie couldn’t wait to start this new and exciting chapter in her life. 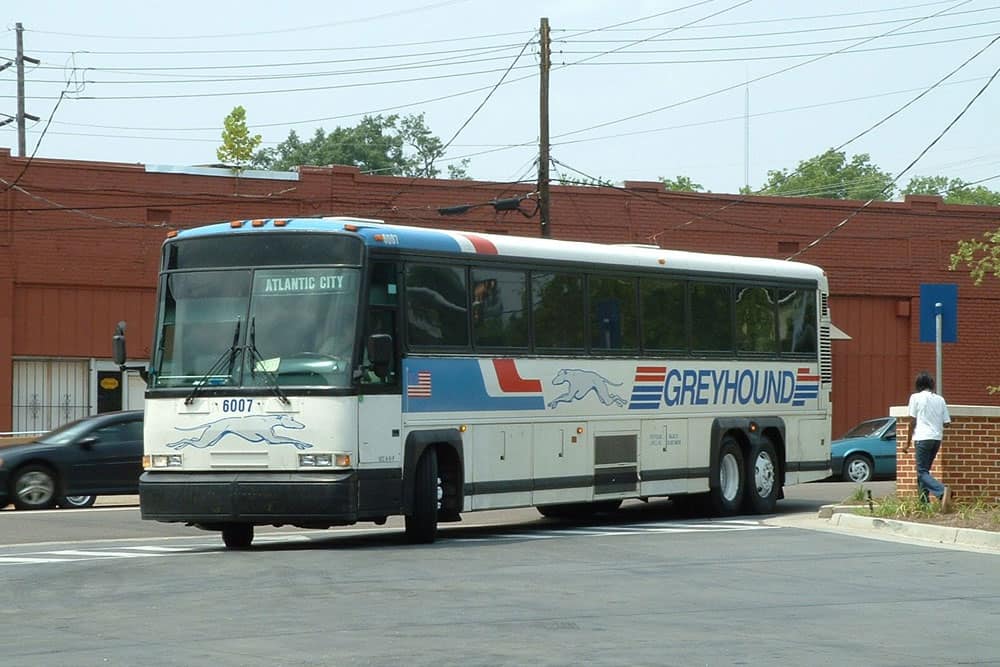 As soon as the bus was ready for collection, Jessie had to borrow the help of a couple of good friends. While the New Yorker had passed her test at the time she ordered the bus from eBay, she still wasn’t fully trained in driving a vehicle that size manually. So, it was up to her friends to drive her new home from California, all the way to the East Coast. Now, those are what you call REAL GOOD friends!

Finally, it was time for Jessie to get to work on turning her old buss into a fresh, hip new home! To get things started, the New Yorker moved the bus to New Jersey for a little while. Why? She had a few contacts who live there that would be able to help her get the ball rolling. 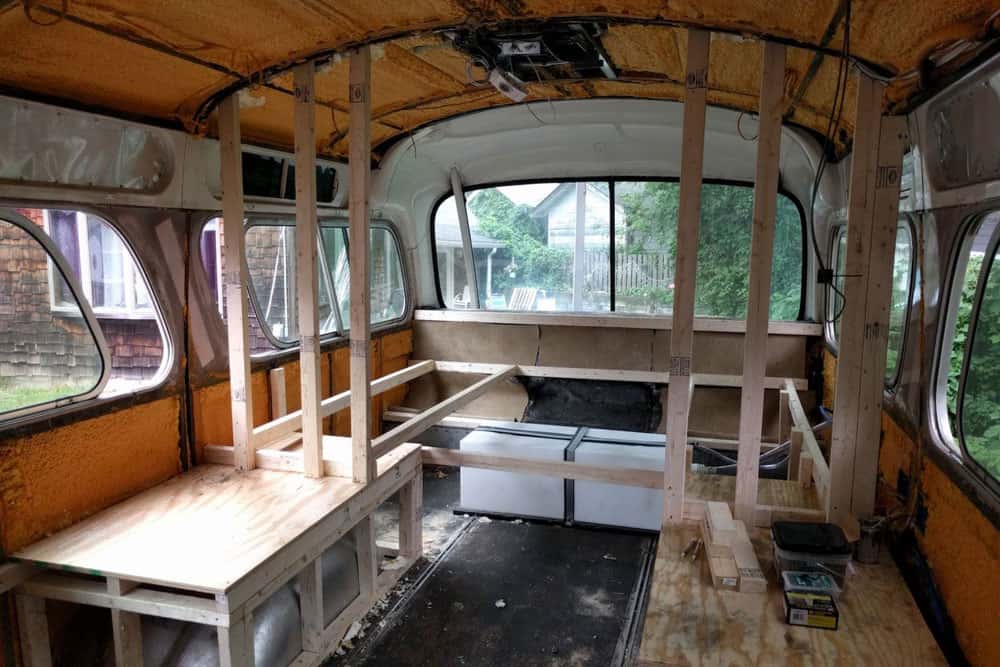 Let the challenge begin! Now situated in Asbury Park, New Jersey, Jessie watched as friends and contractors traveled into the area to help turn her bus into a home. The first step was hiring a carpenter to deck out her floors with some custom woodwork. 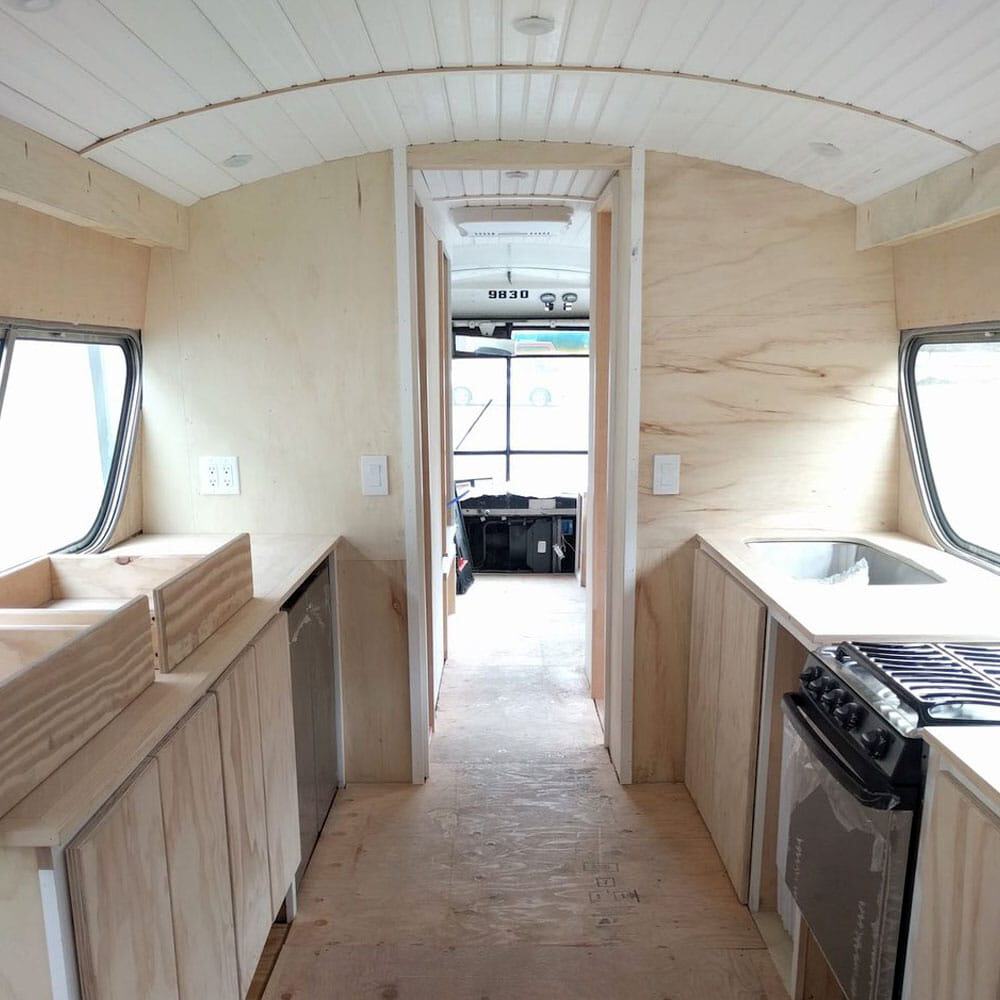 Growing in New York’s Manhattan, Jessie did not have a whole lot of experience creating DIY projects. It’s because of this lack of expertise that she turned to her New Jersey contacts for help, and they really came through. Without them, we might not be looking at such an impressive mobile home!

So, Jessie may not have had much experience in the nuts and bolts of the repairs area, but that certainly didn’t mean she wasn’t willing to roll up her sleeves and learn. While the team got to work, Jessie helped out where she could, like installing and finishing the countertops herself. We’re sure there’s no better feeling than playing a role in building your own masterpiece! 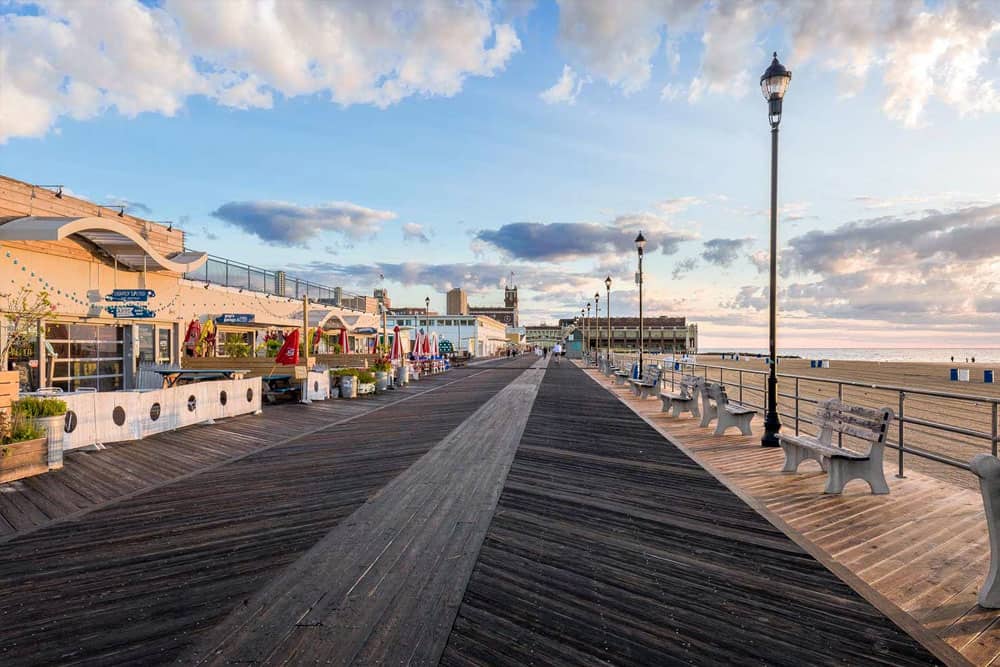 It just so happens that Jessie soon became a big fan of her new area. And she kept the bus there for quite a while! From the moment she bought the bus, it took a whopping three years to renovate her new dream home altogether. What we all want to know is, did all this hard work pay off? See for yourself!

Three years of renovation is hard work, especially when the starting product is an old, beat-down bus! But, over time, Jessie and her team of trusty renewal experts came across a few challenges when it came to transforming such a complex piece of machinery. 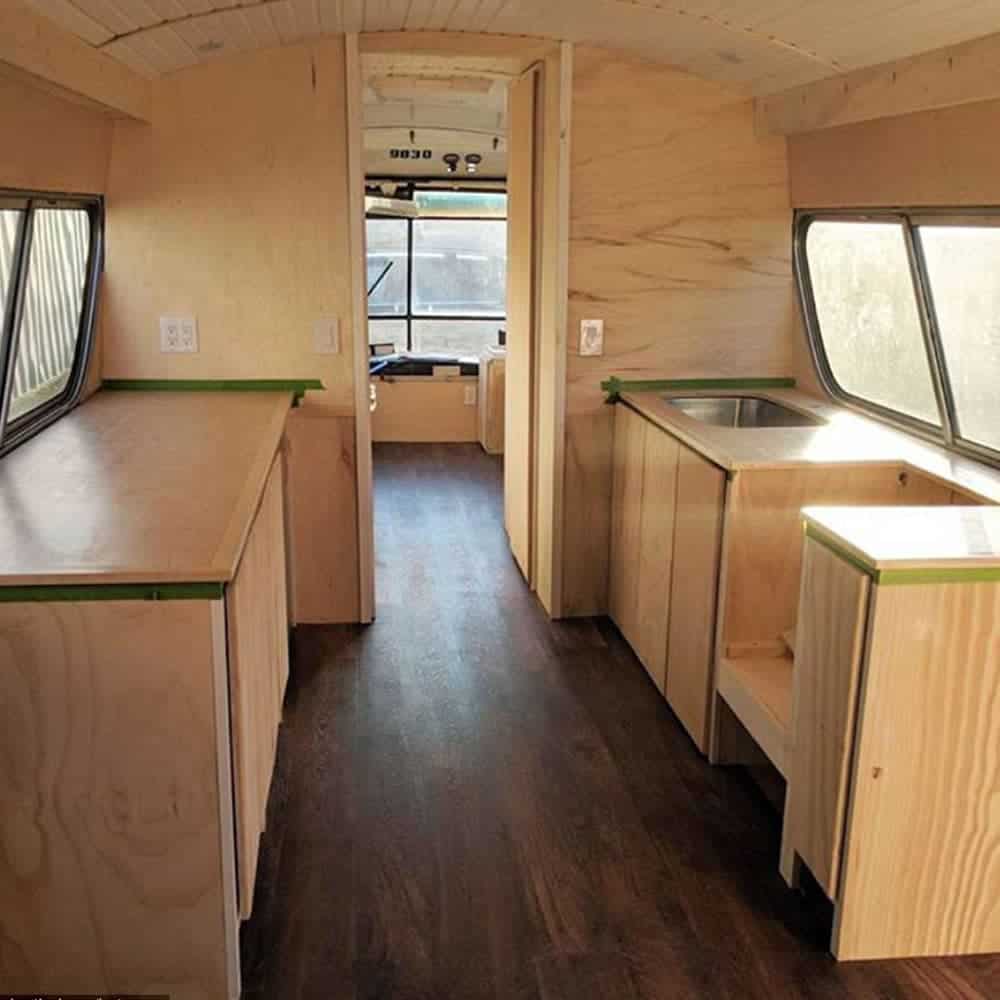 Out of everything that could have posed a challenge on the mobile home-to-be, storage, closets, and walls were by far the trickiest. The team had to make sure that each time they parked the bus, it wasn’t sitting at an angle. Why? This would mess up the positioning of things. It was very complicated stuff!

Taking It All In

Taking a trip back to the start of 2018, how did Jessie welcome in the new year? With a brand new mobile home! When drooling over the beautiful, stylish decor, no one could have guessed that this was once an abandoned old bus. That being said the extensive renovations did cost a pretty penny. 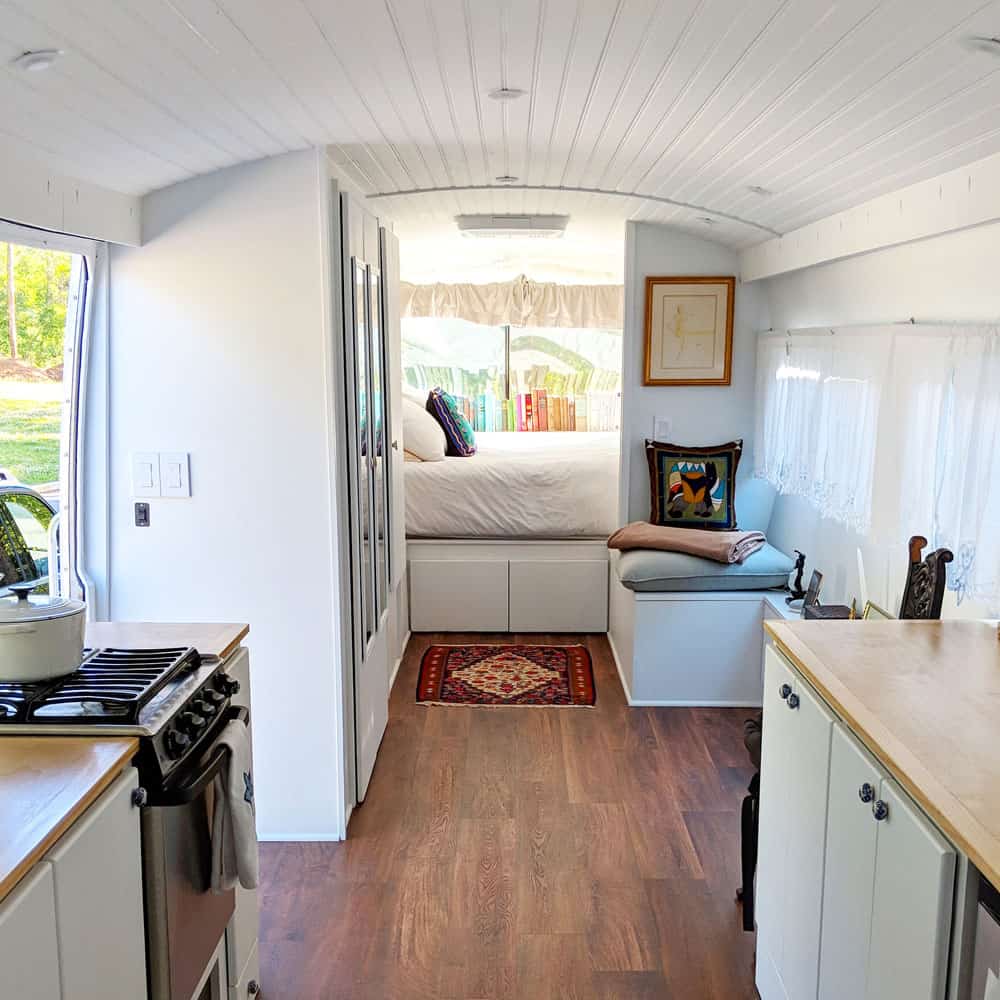 So what was the damage? If you add up all the carpentry, plumbing, electrical work, and everything else that went into making Jessies dream a reality, the final cost came to a little over $125,000. But when looking at the beauty of Jessie’s new home, you can’t deny this is one heck of a bargain! It’s undoubtedly cheaper than anywhere in Manhatten, by a few million!

The kitchen looks absolutely amazing! Check out the built-in sink and five-range stove! And don’t forget about the countertops, which she put in herself! 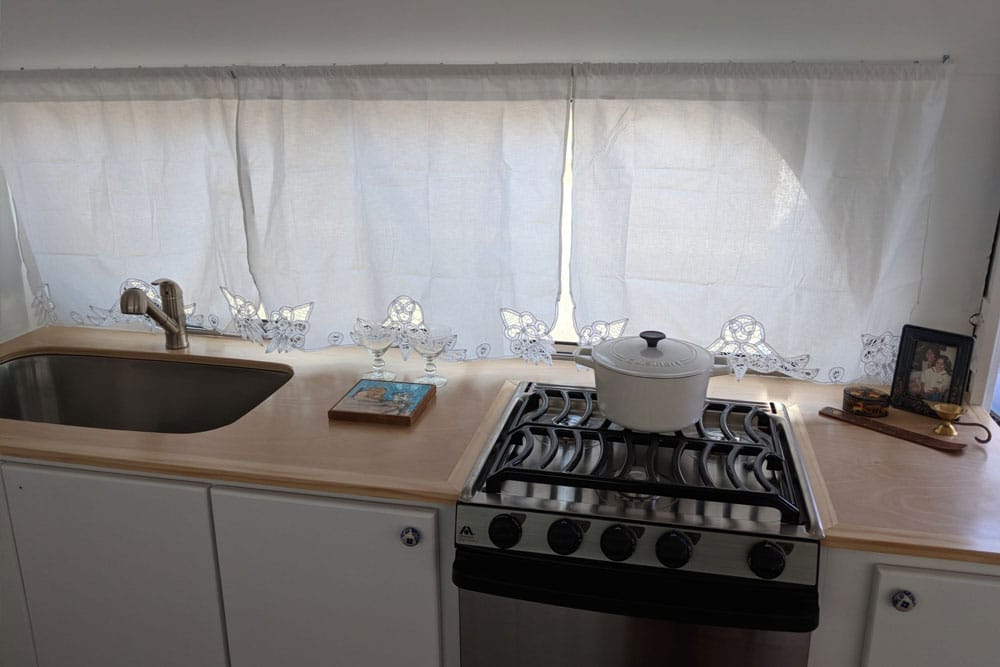 Jessie’s bedroom looks like a dream. Seriously this is the type of bedroom you only see in catalogs and showrooms! Just look at that thick, soft, and comfy mattress! 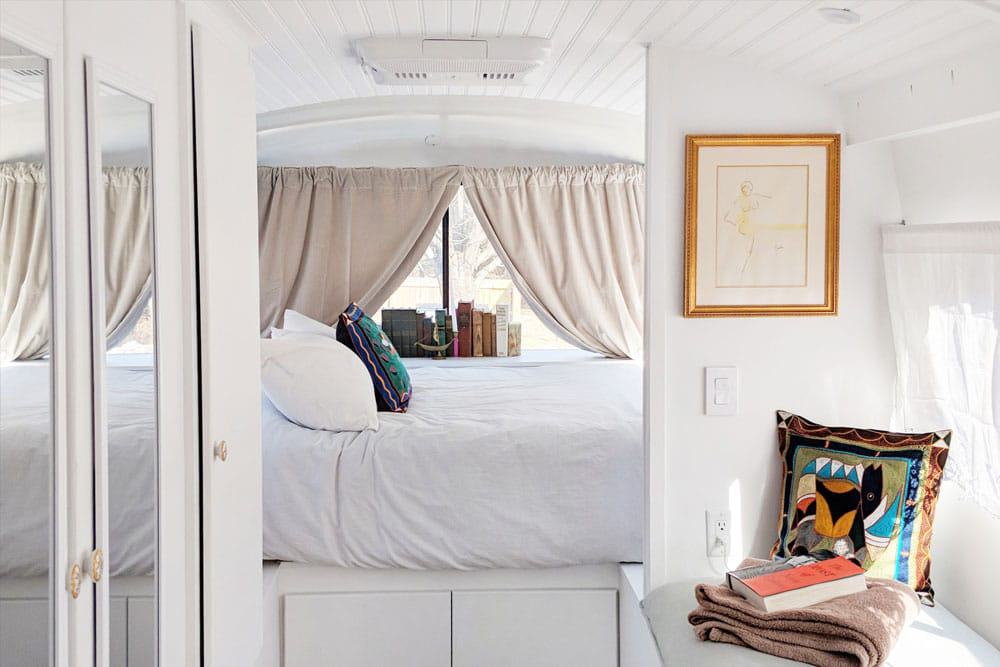 Jessie’s vision for her new bathroom was pretty simplistic, but the finished product turned out more beautiful than she could have imagined! 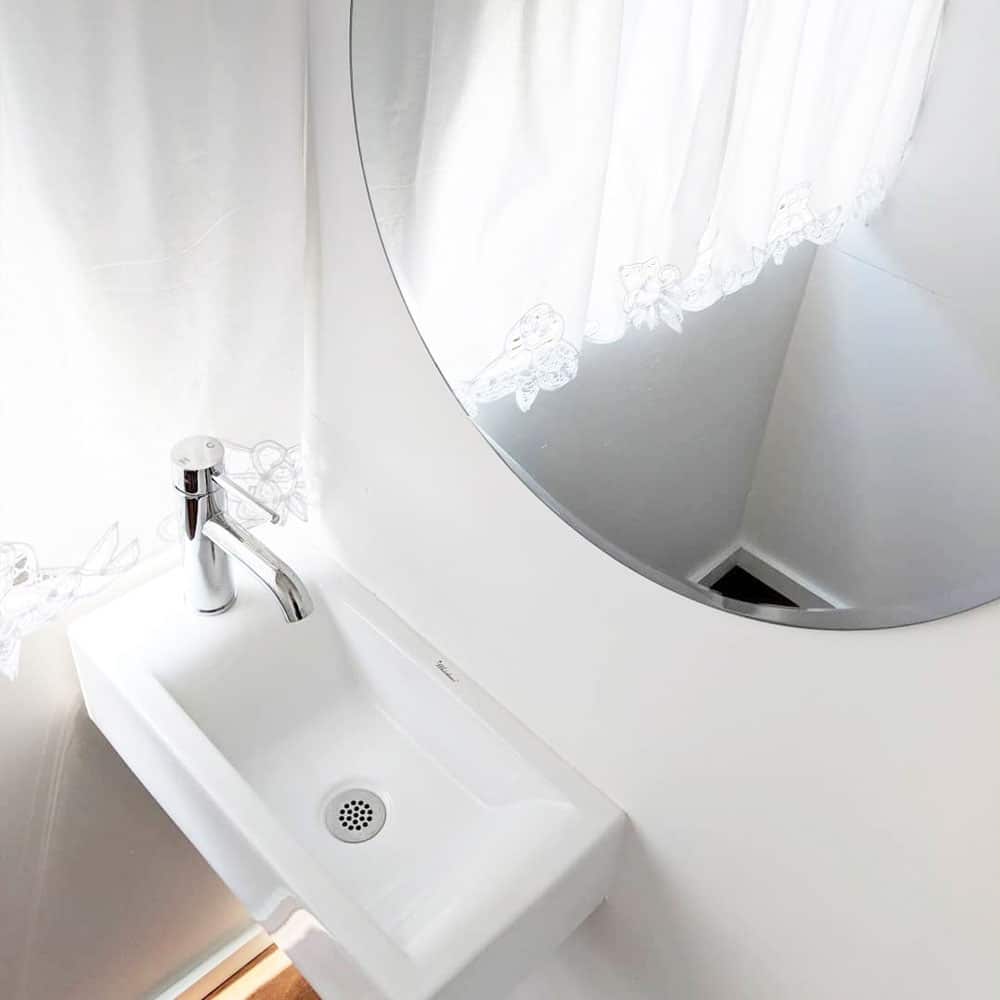 As you may recall, storage was one of Jessie’s biggest challenges, well it looks like all her team’s hard work paid off bigtime. Just look at all her storage space! He closet extends far out in both directions and folds in to save space. Amazing! 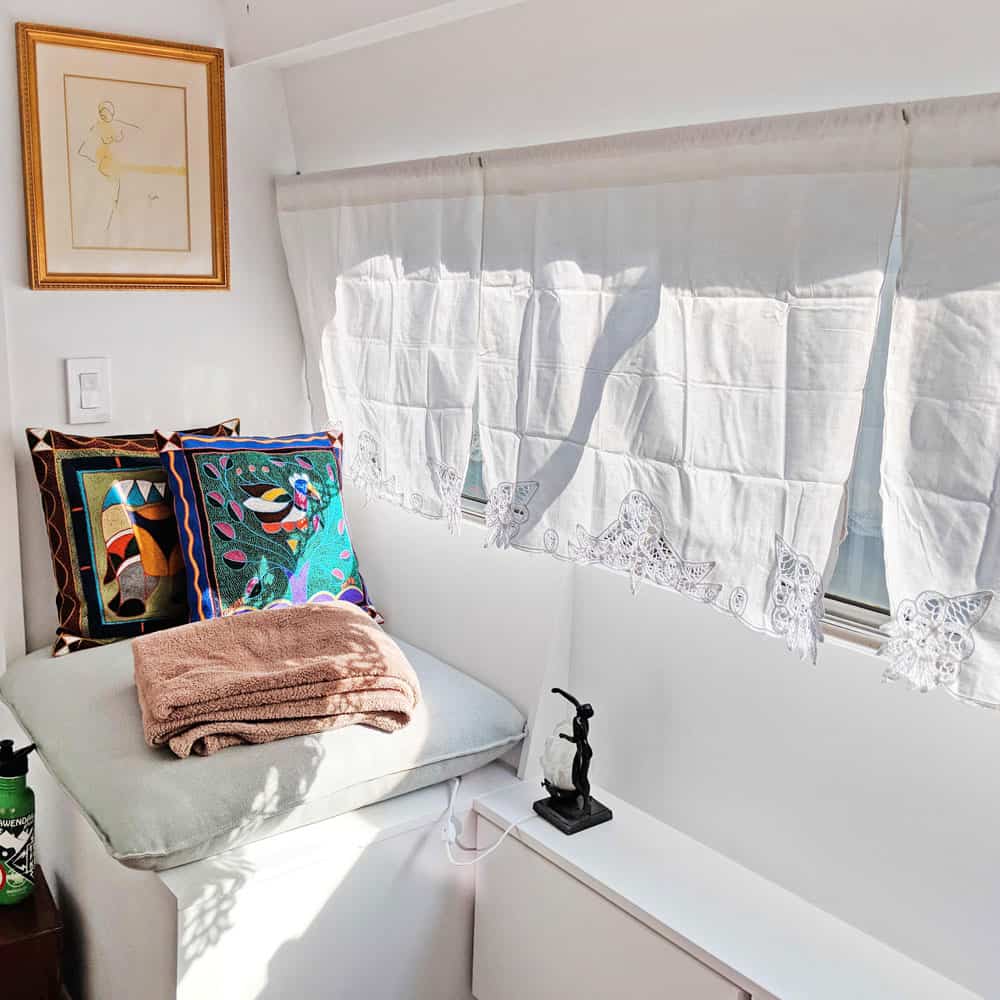 That’s right, while most people would have expected that Jessie would only have room for one-bedroom, she actually managed to build a second. Pretty cool, right? 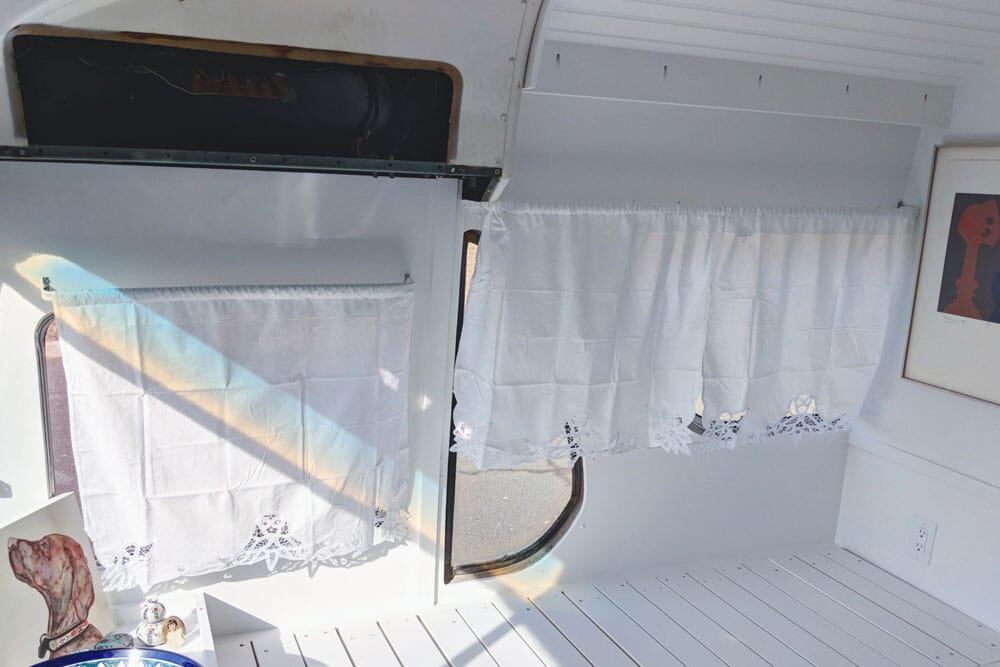 As you can probably tell, Jessie’s color scheme is pretty much all white with some warm wood tones. Jessie really wanted it to be simple, yet warm, and she hit a home run on both counts! 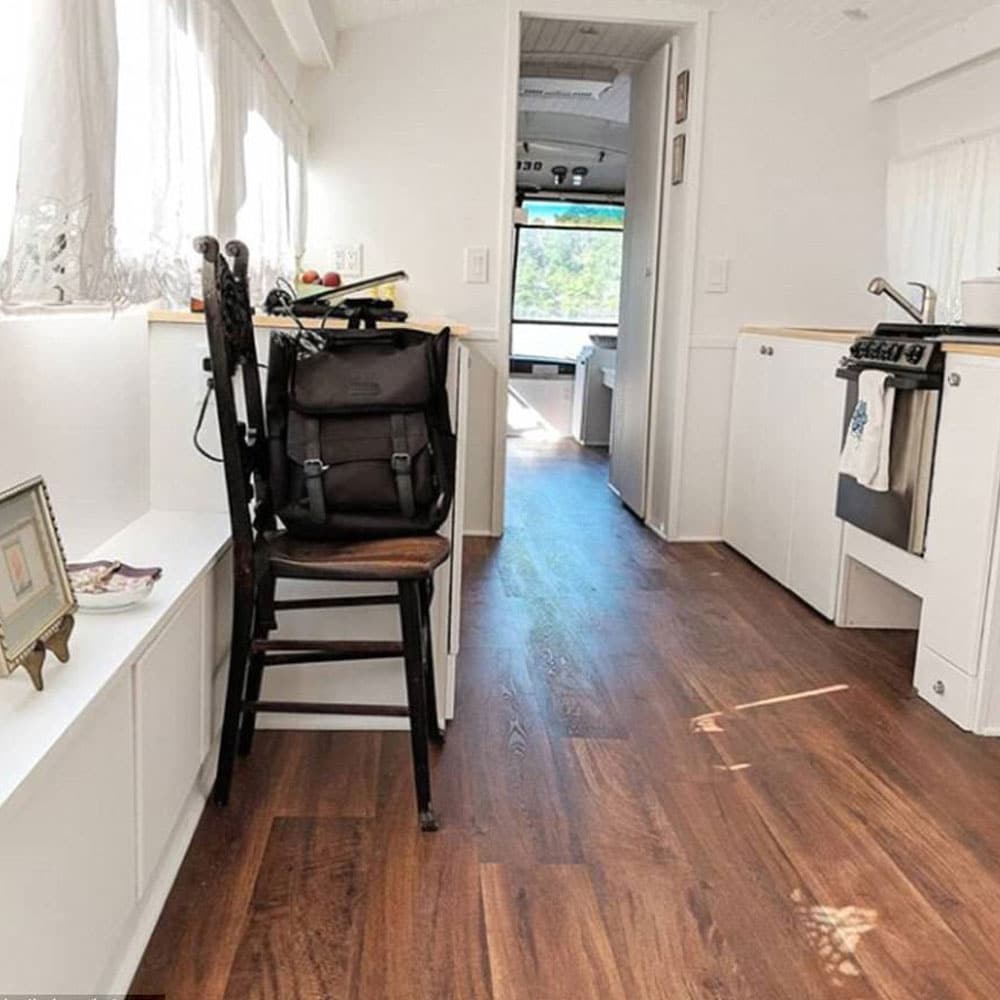 Jessie even has a space for lounging and catch up on some good reads. 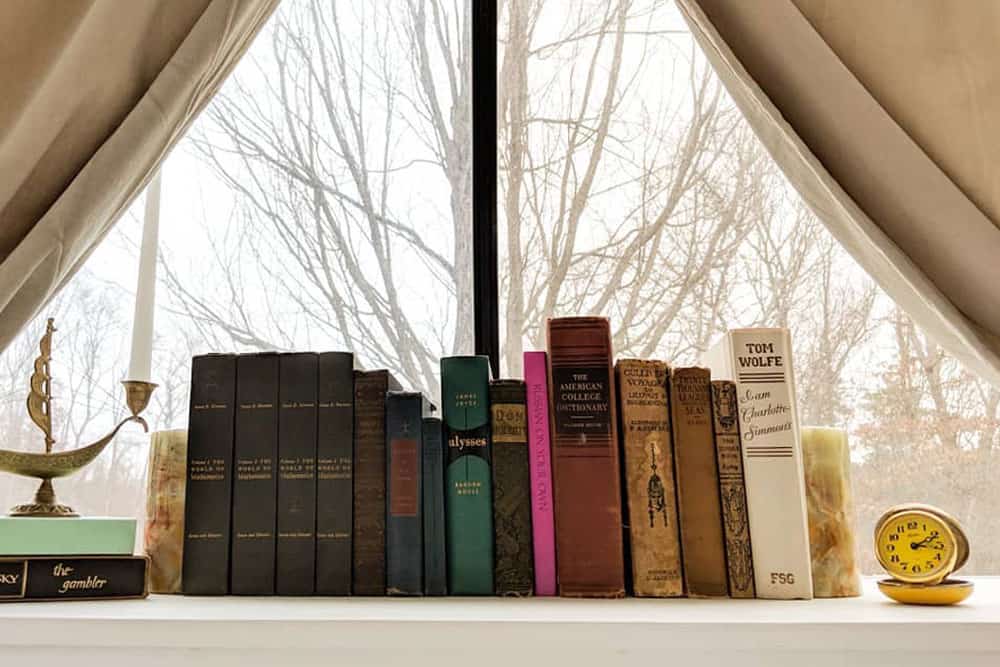 At One with Nature

Can you believe how beautiful this is? Her decor perfectly matches the snowy outdoors! 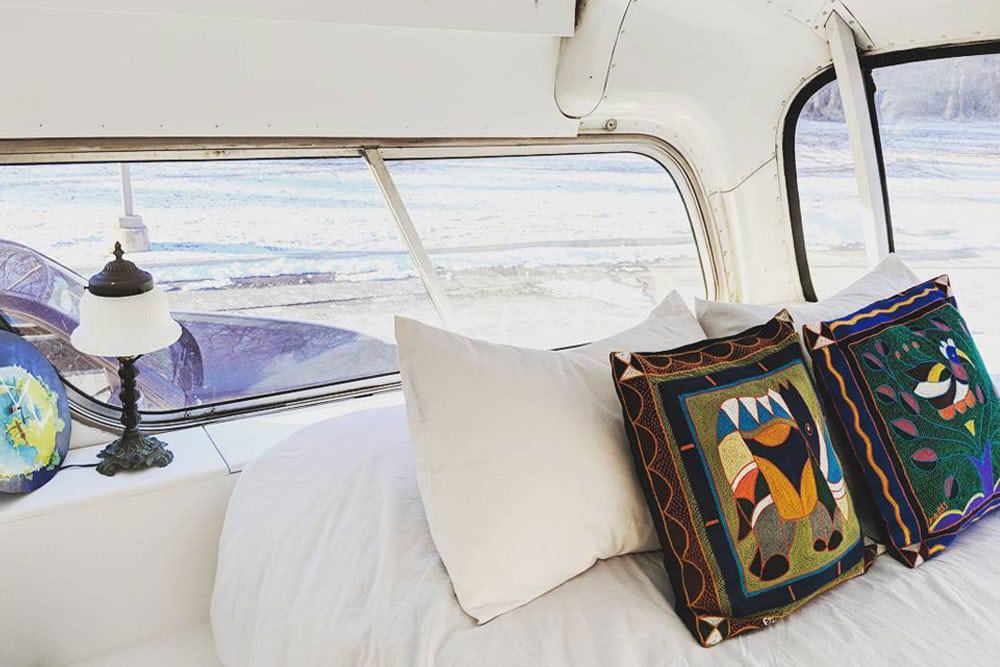 To add the finishing touches to her new abode, Jessie didn’t bother with crazy expensive retail outlets. Instead, she turned to the local Goodwill for some fantastic decor to spice things up at a fraction of the cost! 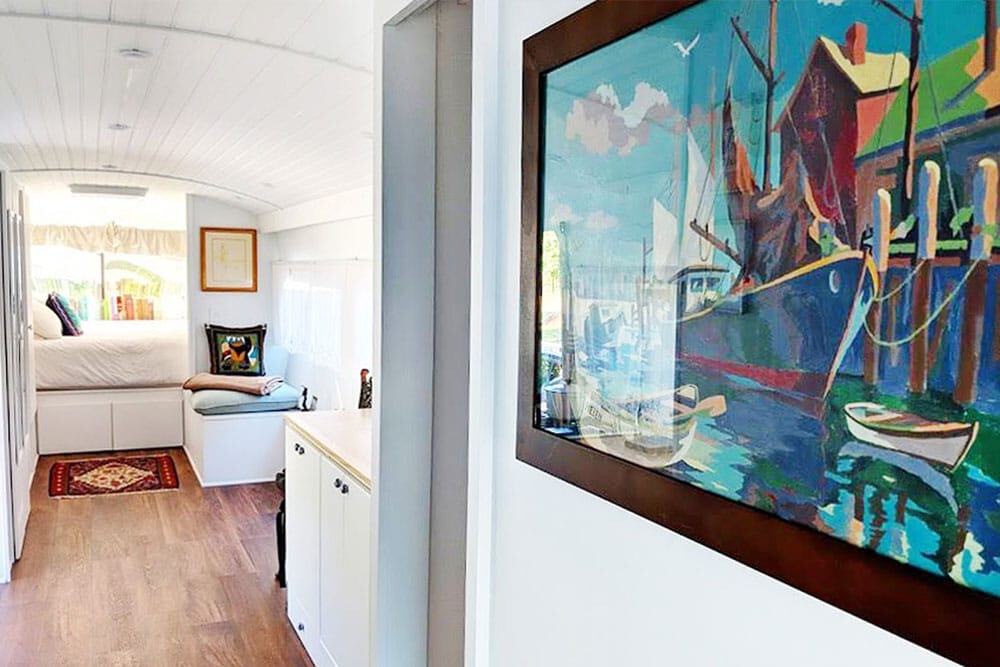 Check out some more great pictures of Jessies finished home. 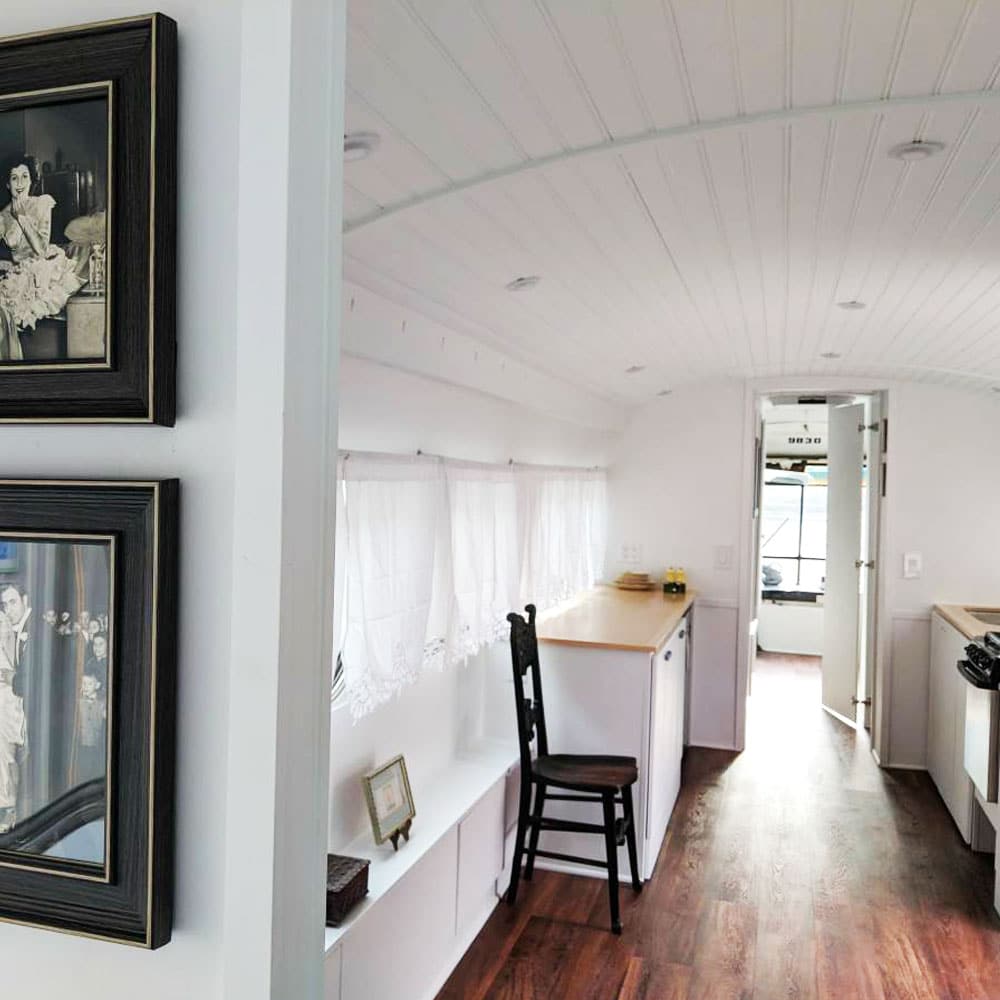 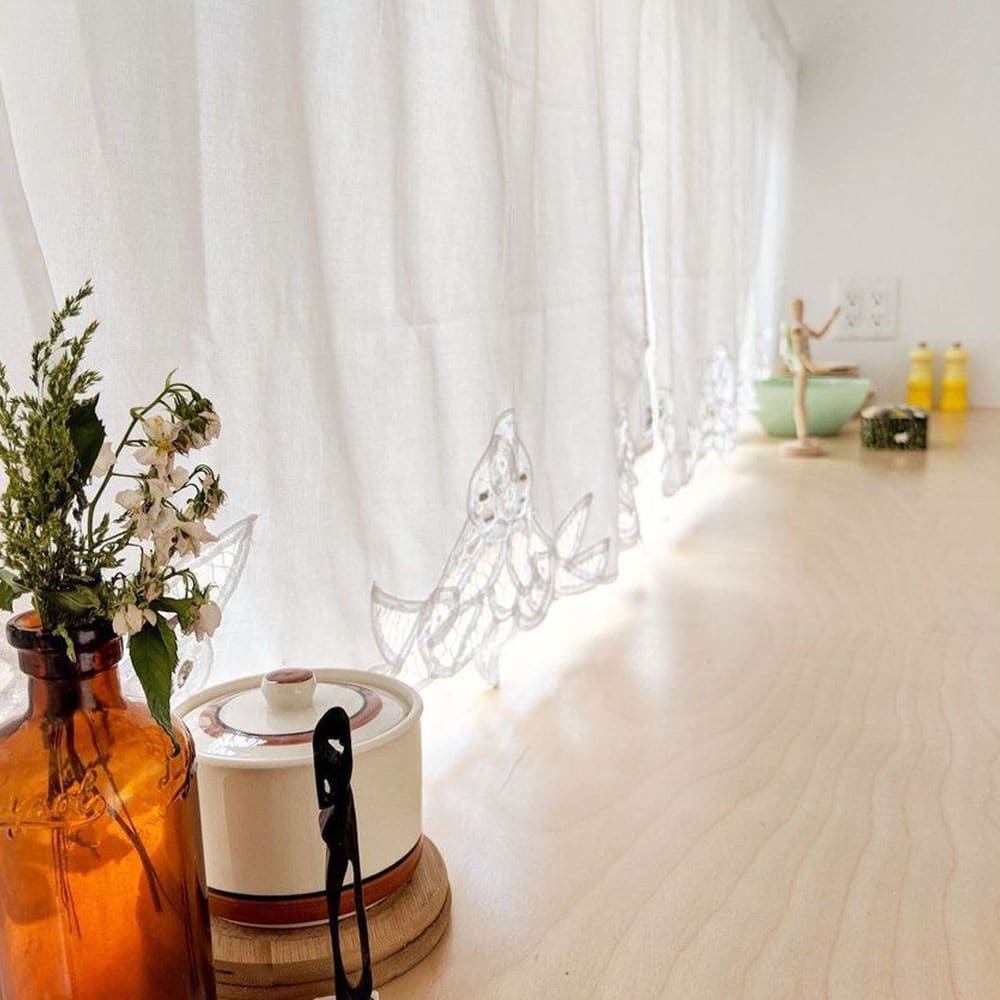 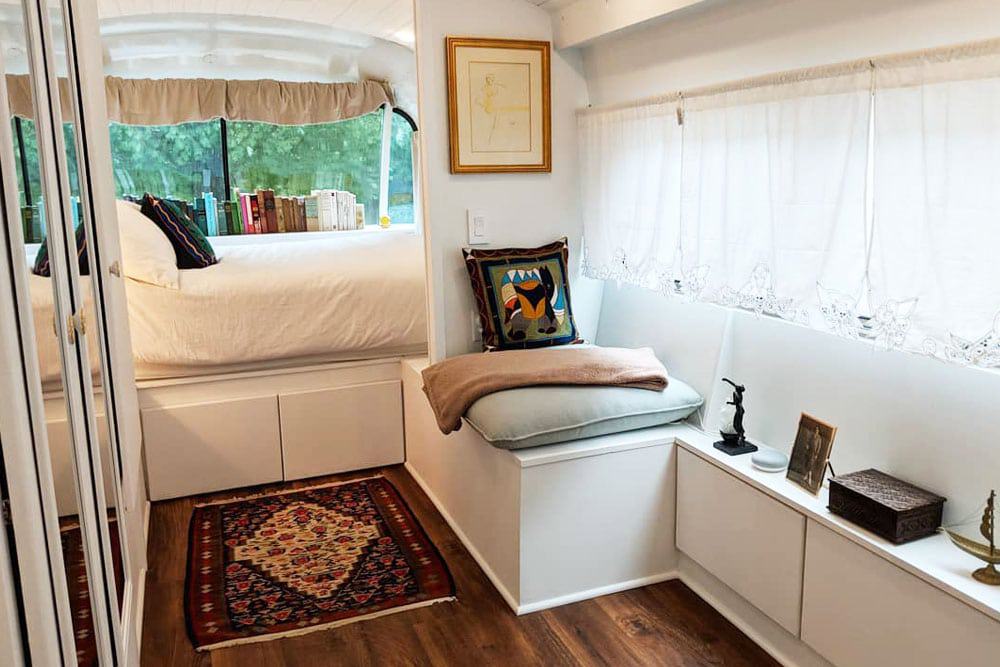 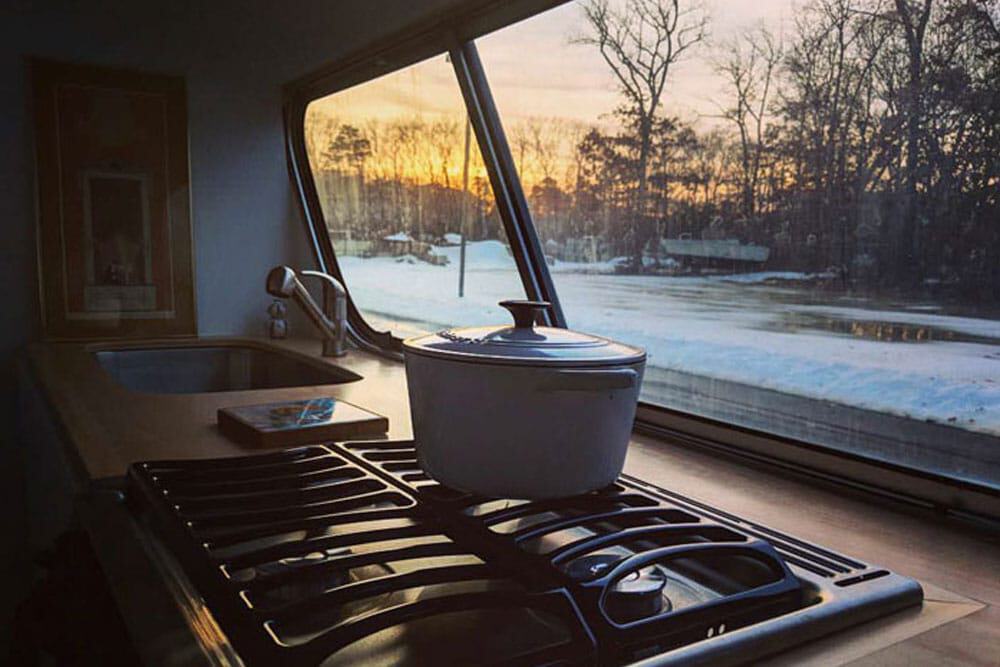 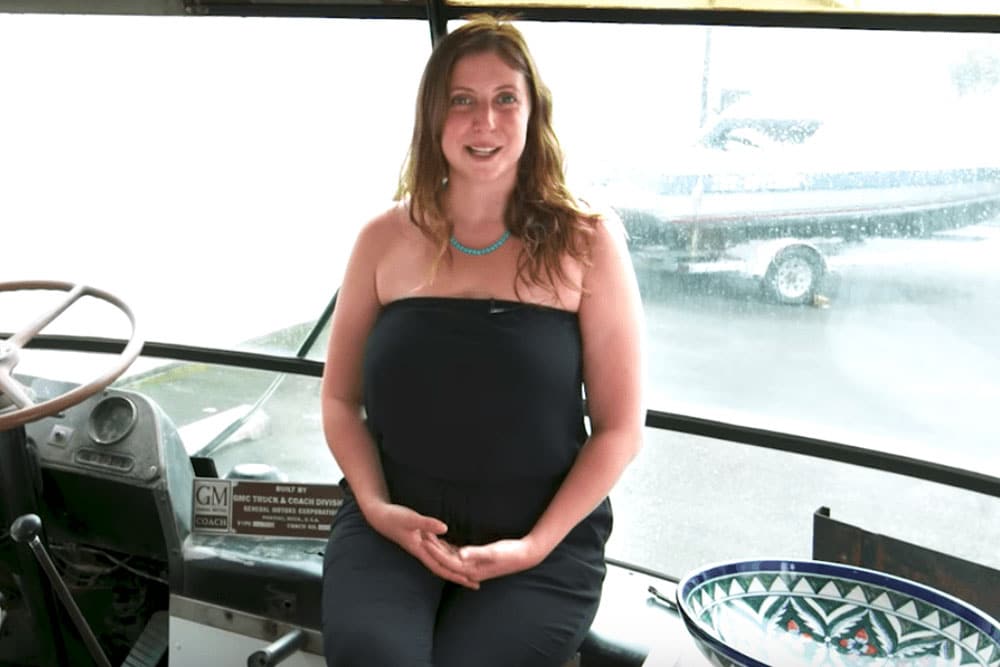 Jessie’s dream home is proof that persistence pays off. After all of her challenges and minor setbacks, she now has a place she can proudly call her dream home. 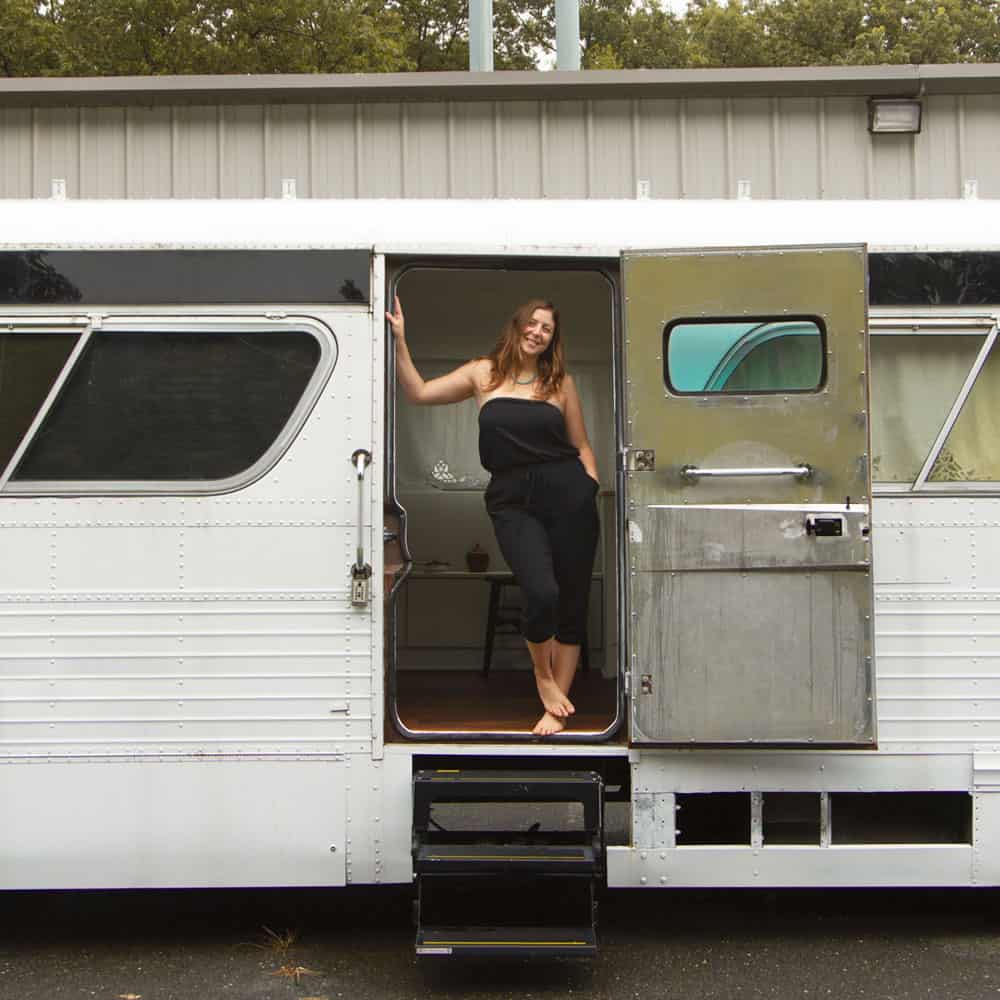 Here’s a video that chronicles Jessie’s incredible journey. Please be sure to share with friends and family!