Are you looking for a new cookbook? The premise of Soup Club is simple – Four people take turns cooking big pots of soup, enough to feed four families. When it is your turn you make the soup you drop it off, along with side dishes and garnishes, at the homes of the other three club members. This happens once a week, so each member cooks once a month and the other three weeks you are treated to another’s home cooking. 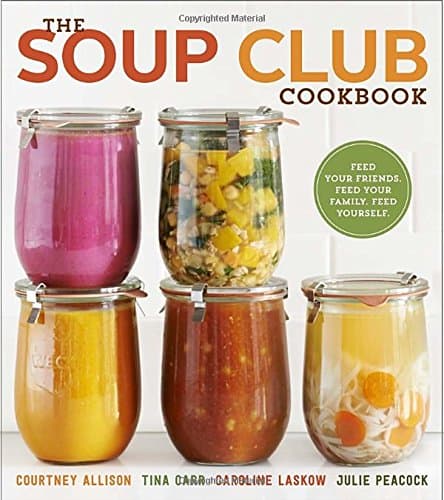 The group will establish your soup day and the time it will be delivered, maybe Thursday at 5pm. That way you can plan your shopping and cooking around a regular schedule and the others in the group can expect their dinner without guessing each week.

You will be cooking enough soup to deliver one quart per adult in each household. This translates to cooking a big enough batch so you have 8 quarts of soup, six to deliver and two for your house.  Two quarts of soup is not enough to feed a family with more than four people. The book did not address what to do if the families in your club have children. Do you cook more or let the family fend for themselves? I suppose you will need to figure that out for each specific club.

The person who cooks the soup also delivers it to the other members, so once a month the cook is doing all the work. It is delivered to the porch of each member and a text message is sent right after delivery. Smart idea, there is no standing around and chatting, just drop off and go to the next house.

There is one other responsibility – Each member will deliver their cleaned quart jars to the next cook before the delivery day. The cook should not have to track down jars or contribute their own each week.

It is unclear how the Soup Club will work for large families. It seems to me that you should look for members that have basically the same number of people as your family and then decide in your group how much will be delivered.

After all the ideas in the first chapter, realize that this book a foremost a cookbook and the recipes look delicious. I had my husband and daughter take a look and they both found multiple recipes that they were interested in trying.

This cookbook covers every kind of soup – from broth to beans, from puree to hearty chowder. Even chilled soup and meat based chili and gumbo are covered. There is certain to be a soup (or 10) to fit your family palate.  Of course, no one will love every recipe in a cookbook. My family probably found about 60-70 percent of these ideas ones that we could make or adapt to feed our family.

Adapt is the key, because some of these recipes are not very kid friendly. For instance, there is no way I’m going to get the grandkids to eat Borscht or anything that has cooked kale in it.

In addition there is an extensive section of recipes for salad and dressings, vegetable side dishes, and bread, grains and pasta to serve with the soup.

Who is The Soup Club Cookbook for?

Unlike the last book I reviewed, this cookbook is a keeper for my family. First up? Potato Cheddar Soup.

Here’s the recipe for 8 quarts of soup. We are going to make this, eat to our hearts content, and freeze the rest for later.

Buy it! Even if you are not going to start a soup club, you should consider The Soup Club Cookbook for its fantastic recipes.

Food-sharing is the hot new thing in the “getting dinner on the table” conversation, and in The Soup Club Cookbook, four friends share not only their formula for starting a soup club–which gives you at least three meals every month when you don’t have to worry about dinner–but also 150 fantastic recipes for soups and sides and storing tips for stretching those meals across the week.

The Soup Club began when four friends (who, between them, have four husbands and ten hungry kids and several jobs) realized that they didn’t actually have to cook at home every night to take pleasure in a home-cooked meal. They simply had to join forces and share meals, even if they weren’t actually eating them together. Caroline, Courtney, Julie, and Tina happen to be neighbors, but a soup club is for anyone: colleagues, a group of workout buddies, a book club. All you need are a few people who simply want to have more home-cooked food in their lives.

The Soup Club Manifesto. A Declaration of Food Sharing:

We declare that soup shall be shared.
Why soup? Soup scales up and travels well.
Soup is economical, basic and nondenominational.
Soup Club is a state of being, not a monthly meeting.
We are not limited to special occasion soup or holidays, births, moving or grief.
The magical delivery of soup to your door is elemental to Soup Club.
Salt your soup. Embrace crushed red pepper.
A black belt is white belt who never quit. Make your soup.
Never apologize for your soup.
Make soup with abandon.
Remember, it’s just soup.
You will need a bigger pot.

I was given a copy of this book from Blogging for Books, in exchange for my review. The opinions are entirely my own.