Put This Versatile Appliance to Work in Your Kitchen.

I purchased a rice cooker several years ago. I can count on it to make perfect rice – every time. The rest of the time it sits on a shelf in the garage looking – well…forlorn. There must be something else to do with it, because why waste the money for the convenience of cooking rice once a week. But how to use a rice cooker?

How to Use a Rice Cooker?

There are several benefits to using a rice cooker daily.

The rice cooker intuitively cooks until all the water has been completely absorbed by your grain, and then it switches itself over to its “warming” setting to keep your dish warm until you serve. Because of the machine’s tight seal, rice cookers lose less liquid to evaporation, so using a slightly smaller amount of water, rather than more, is always a better idea. (Whole Grain Council)

1. Grains – Once I got adventurous, the next thing I cooked in my rice cooker was quinoa. It has the same cooking requirement as white rice, so it’s a natural progression. In fact all kinds of grains (and seeds like quinoa) can be cooked in a rice cooker. They are usually cooked at a ratio of 1 cup grains to 2 cups water. Try substituting vegetable or chicken stock for the water as a flavorful addition.

2. Oatmeal – Well, this is technically a grain, but it deserves its own category. Thanks for the Food uses her rice cooker for morning oatmeal. “The only downside to oatmeal, and especially the steel cut variety, is that it can take a while to cook on the stove and tends to boil over, making a huge mess – which can be just another annoying hurdle during a hurried morning routine. Making oats in the rice cooker eliminates all that fuss.”  I completely agree.

3. Dried Beans – One of my favorite side dishes is black beans and rice, Those beans are hard to cook on the stovetop without making a huge mess. Here’s a recipe from Desumama for Cuban Black Beans & Rice in a rice cooker. Soak the bean overnight and add to the cooker – half beans, half water. 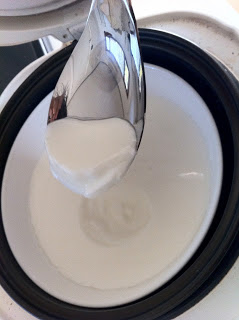 4. Yogurt – I’ve been making yogurt in my crockpot the past month or so, and it turns out that you can use a rice cooker too.  “I have a crock pot, and most people don’t. How will the crockpot-less enjoy fresh, homemade yogurt? It’s basically the same feeling I get when I think about poor kids in North Korea without iPhones. Such a travesty.” Don’t miss the detailed instructions at Knifing, Forking, Spooning.

5. Bread – If you are ovenless, and love fresh homemade bread, the rice cooker may be your new best friend.  Be sure and stop by The Fresh Loaf and see her tutorial for rice cooker bread. It looks fantastic ans easy to make. Problem solved!

6. Banana Bread / Sweet bread – Many sweet breads can be made in a rice cooker. This recipe from Wide Island View is for banana bread.  I bet this would be terrific if you substituted applesauce, or pumpkin and spices. 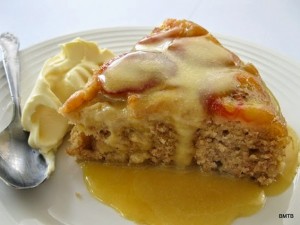 7. Banana Pudding – If you are looking for something sweet to make in a rice cooker, this is it. The consistency of this banana pudding is like bread pudding. The caramel sauce brings it to over the top good. Be sure and see how Baking Makes Things Better makes this creative Banana Pudding.

8. Vegetable Frittata – Did you know you could cook eggs in a rice cooker? This recipe from Just Bento looks to be a keeper. It is basically a frittata using eggs and summer vegetables. It even uses the rice cooker bowl as a mixing bowl. While it doesn’t get browned and crusty on the outside as with an oven-baked or stovetop fritatta, it turns out really nice and fluffy-creamy in texture. It’s a great all-in-one recipe that has protein, carbs and vegetables.

9. Steam Vegetables – We use our rice cooker every Thanksgiving for Brussels sprouts. There are people in the family who cannot stand the smell of them cooking, but the rest of us don’t want to give up our favorite vegetable. The solution is the rice cooker – in the garage. All you have to do is place water in the bottom of the pan and place the streamer basket on top. Set for 15-20 minutes and you have your favorite vegetable, without taking up valuable stove-top space on busy cooking days. Plus there’s no grumbling from the Brussels sprouts haters! 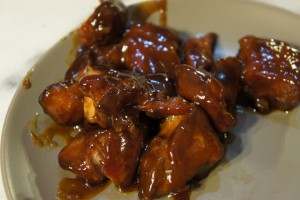 10. Rice Cooker Ribs -This recipe for rice cooker ribs from Domestic Diva Katie looks easy to make. In fact, it is cooked completely in the cooker – no stovetop needed. The sauce is created with brown sugar, Worcestershire Sauce and dark beer.  Yum!

11. Roasted Pork – Cooking meat in 1 pound portions is even possible in a rice cooker. This recipe for roasted pork from Japanese-Kitchen looks tasty. The directions call for turning the meat after about half an hour so make sure your cooker can be opened mid cycle. I bet this process could be used with a small cut of beef too.

12. Spiced Pears – Cooking the pears in a rice cooker is probably a mix between steaming and poaching. Jeanette’s Healthy Living made Steamed Ginger Peaches and Pears and they turned out fabulously, so the idea of cooking pears in a rice cooker isn’t so far fetched. You can convert this recipe to apples or try different juice combinations to make your own creations.

13. Cake – We’ve hit the jackpot for cake recipes with this post from Everybody Eats Well in Flanders. If you are looking for a rice cooker cake recipe this is it. You’ll find everything from marble cake to cheddar cheese cake to walnut butter cake. Small kitchen people, you now have no excuse.

Share your favorite rice cooker recipes in the comment section below and see all kinds of Rice Cookers at Amazon. You’re sure to find one that’s perfect for your family.

What will  you cook next in yours?