Strategies to Invest, Stockpile and Build Security for Today and the Post-collapse Marketplace.

You’re prepared for hurricanes, tornadoes, blizzards, earthquakes and other natural disasters, but are you ready for the inevitable man-made disasters to come? The Prepper’s Financial Guide teaches you the other half of disaster planning—how to survive the economic turmoil that hits regions and nations after the storm has passed.

Scenario: An economic collapse is imminent. What does it mean for you? Picture an economic depression cranked up to eleven. It’s happened before. At some level, you have personally felt its effects. 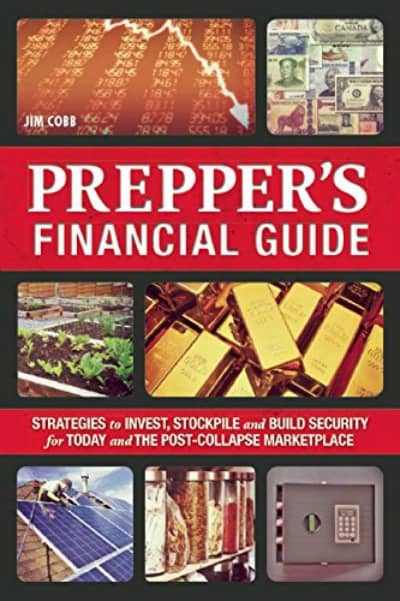 There may be some damage to infrastructure as a result of civil unrest, but nothing on the scale of an earthquake. It’s a disaster without the death and destruction. The chain of events happens over a lengthy period of time, akin to the frog in a pot of water on the stove. Slowly boiling itself to death.

Germany 1921-1924 – After WWI Germany had to pay for the damage other countries had suffered. Their first installment was 2 billion gold marks and it depleted their finances. The following year they were unable to make the next installment and through a series of financial wrangling’s they began printing more money, which caused inflation. Workers were laid off and many were being paid hourly so the family could rush to spend the money before prices rose any higher.

The United States 1929-1940 – The Great Depression where we find more financial wrangling’s starting with the stock market, where stocks were purchased on margin, meaning the purchaser only paid a portion of the actual price. I’m not going to get into a lengthy Depression Era discussion, but you know the scenario. The stock market crashed, many banks closed and people lost all their hard earned money. On top of it all, there was a drought and the dust bowl became prevalent.

Argentina 1998-2002 – In 1999 Argentina devalued its own currency and people started buying from Brazil instead. No exports equal less money coming into the country. Government corruption and bank runs mean that people lose the houses, businesses close and unemployment reached 25%. Argentina finally stabilizes by 2003.

The Great Recession 2007-2009 – more stock market crashes, bank closures, and bailouts. My family was hit particularly hard during the recession and even now in 2015, many homeowners are still facing foreclosure and are upside-down on their mortgages.

How Will You Protect Yourself From an Economic Collapse in the Future?

The rest of the book is filled with practical things you can do to be more self-sufficient and able to weather a financial crisis, be it big or small. These 6 tips are your first step to security when economic collapse comes again.

The Prepper’s Financial Guide: Strategies to Invest, Stockpile and Build Security for Today and the Post-Collapse Marketplace

1. Debt Reduction is the first option to consider and Jim offers some tips and tricks to help you get out of debt. Steps you through creating a budget, saving the extra to reduce debt, and get your preps ready. A man after my own heart. I’ve talked about it recently here and here.

Jim lists ways for you to save money on utilities, food & groceries, health expenses, rent & mortgage and even to make sure your credit is managed properly. Think about bringing in extra income to accomplish it all.

2. Currency is king, but be sure you don’t put all your eggs in one basket. Over the years, things that are considered commodities have been traded as cash; think tobacco or salt.  Another example is gold or silver coins.  Fiat currency is a token or certificate issued by a government to signify money. It is our paper money system and no longer commodity based, but now faith based. We all agree that these pieces of paper equal payment in financial transactions.

Learn about currency from other countries and those that are most stable. Tip from the book: Have the actual paper money for other countries in hand. Having a few thousand dollars in an online account won’t do you much good if you can’t access it due to business closures. Ask your bank to order currency for you.  You can often pick it up at your local branch and set it aside for a rainy day.  You will find suggestions to store it in a secure place in your home. Currency Sleeves on Amazon

Consider the purchase of precious metals and minerals as part of your financial plan. I have absolutely no background on purchasing precious metals and those that don’t know how to determine the value and authenticity of metal are at a great disadvantage. How do you know who is trustworthy on the internet? You don’t. Jim’s tip: Find a local dealer, a company you can visit in person and make purchases. He lists several suggestions about how to find them and the safest way to purchase gemstones – a reputable jeweler in your area.

3. Post collapse barter & trade goods are items that you stockpile for the future. Mentioned were tobacco and matches, but foremost these items must have value to you because you may never get the opportunity to trade them and will need to use them yourself. They should be fairly shelf stable and must be relatively inexpensive now – when you need to purchase them. Jim gives us many great suggestions starting with the vices – alcohol, caffeine and tobacco.

I found this chapter quite helpful and if you just used his suggestions you will have a decent supply of items to use in case of personal financial struggles – not just economic collapse.

4. Be prepared to barter skills instead of stuff. If there is ever a complete breakdown in society, your skills will translate into a cottage industry of sorts and will be useful for your own personal benefit. These are things like the knowledge of medicine, sewing or soap making. Even baking or handyman skills can be traded for goods in a post collapse society. You will be surprised how many of your current hobbies will translate into a bartering skill. Start collecting supplies for your skill now.

5. Know how to safeguard your valuables and how to find and securely hide what you’ve worked so hard to achieve. Jim goes over all the obvious areas that thieves will look in your home and suggests some other recommended hiding places. Did you know they make Fake electrical outlets

? I had no idea that for about $6 you could install a little hidden safe in your wall.

6. Become self-sufficient. The greater the number of your basic needs you can satisfy on your own, the less you will be impacted by a societal breakdown. For me, this just makes sense on a daily basis. Back during the Great Depression, the people who had the least amount of trouble were those who had their own land and raising their own food anyway. Start gardening for food production; learn about wild edibles and how to preserve your own food. Cook from scratch, harvest rainwater and repurpose what you can.

If you realize that there is more to “prepping” than buying pallets of freeze-dried food and cases of bottled water, then Prepper’s Financial Guide by Jim Cobb is for you. Everyone that strives to be more self-reliant should own a copy. Click the picture to get a copy of your own.

There are affiliate links in this post. I was given a copy of this book in exchange for my review. The opinions are entirely my own.