You have the freedom to plant several types of herbs and vegetables with a planting depth of 8 inches. This is where your creativity really begins to shine! We have all seen those beautiful combination plantings with lots of color and trailing plants.

This is what you can do in an 8 inch container. Remember to select a container that will give your plant’s roots room to grow, but not so much that it will not fill out the pot.

Be aware of the spacing recommendations on the seed packet or plant label, but push the limits. Just like planting in this grow bag, you can space plants closer together in a container than in a garden.

Consider the mature size of the plants you will be growing.

Plant leaves should grow to touch each other in a container, providing shade that will help retain moisture in the pot. If you have chosen the right kind of potting soil, and are using mulch, weeding should be minimal.

Unglazed clay pots, such as those made of terracotta, are porous and water can quickly evaporate from them. These may seem more natural or appeal to those who want a certain look, so if you are using these, soak them before planting to slow down evaporation.

Plastic containers offer an advantage if they are to be placed in full sun,  because they will hold water longer and not need watering as often as clay does. If you like the look of clay, there are look-a-likes available in plastic.

No Soggy Soil – Drainage is Important

If the 8 inch pot you’ve chosen doesn’t have a drainage hole in the bottom, add one. Your container must allow for drainage when you water. If you don’t want to put a hole in a decorative container you can simply put a smaller pot inside the decorative one, being sure there is some room at the bottom for water to drain out.

This will provide a reservoir for the water to drain into. The soil has to drain water or the plant roots won’t be able to breathe.

Tomatoes are more iffy when gorwn in containers. For these plants, 8 inch deep containers is the lower limit, with the 12″ pot being the standard size. But you can steer clear of heirloom varieties, which tend to grow tall and bushy and opt for small, container-friendly varieties, which fare well in 8-inch containers.

Look for the so-called dwarf tomatoes or cherry tomatoes; for larger varieties, choose 10-gallon containers, as tomato seedling need to be buried deeply. Unlike other vegetables, tomatoes grow roots from their stem. So, when planting a seedling into a container, you’ll need to remove the lower set of leaves and bury the plant deeply.

Also, keep the soil moist but not drenched; and avoid adding moisture to the plants’ leaves, as tomatoes are easily prone to fungal infections and blight. Also, water consistently, and keep an eye on the pot to make sure that the soil doesn’t gets too dry between waterings.

Also, feed your tomatoes consistently with a slow-release fertilizer. Some gardeners recommend adding organic fertilizer every couple of weeks after the plants starts bearing fruit. Until then, if you fertilize the soil before planting you’re good to go even with a potted plant.

Also, keep your tomato containers in a place where the plants can get at least 6 to 8 hours of direct sunlight per day. Don’t keep young plants in full sun if you haven’t hardened them off beforehand. Seedlings and young plants in containers should be kept in semi-shade for the first several weeks to one month.

For a bountiful harvest, make sure that you prune regularly the so called tomato suckers, namely young shoots that grow from the point a leaf meets the stem. While some tomato suckers will produce flowers and fruit too, if they are left on their own, they’ll unnecessarily draw vital energy from the plant and turn it into foliage instead of fruit.

A tomato plant grown in a container may not bear fruit because of poor pollination. Even though tomatoes are self-pollinating plants, they do need help from bees and the wind for pollination purposes. If bees and wind are non-existent, you could hand pollinate your tomato plant flowers every two to three days until the flowers wilt and start creating fruit.

While there are fancy devices for hand pollination out there, cotton swabs. a toothbrush, or a soft paintbrush should do the trick. Some pro gardeners recommend using an electric toothbrush to prompt the flowers to release and distribute the pollen.

Growing Cucumbers in 8″ Containers: A Handful of Tips

Cucumbers normally need plenty of room to develop a strong root system. But you can grow them in containers if you pick the right variety. Go for small cultivars such as Salad Bush which is a bush variety, which means that it won’t spread over like its normal cousins, and grows up to 2 ft tall.

Also, cucumbers are prone to transplant shock. So, don’t disturb their roots. Make sure that you’ve picked the right container for the variety and allow it to grow at its own pace.

If your potted cucumber plant doesn’t yield fruit, poor pollination may be to blame. Pollinate by hand the flowers many many times or place the pot in a spot with plenty of bee action. Attract bees to your garden by planting plenty of flowering plants and refrain from using pesticides which might harm and kill them.

Cucumbers love plenty of water. So, give them a good soak during the hot summer days. A lack of water translates into frail or slow-growing vines. You might also need to add mulch to your pots (Check out my experiment with soil polymer crystals as mulch on my potted plants.)

Also, discolored vines is a telltale sign that your cucumber are not receiving enough nutrition. Just like tomatoes, cucumbers are heavy feeders. Use organic fertilizer every month. You could prepare the soil in the container before planting but only if it is necessary. Excess fertilization might lead to poor harvest and a bushy plant.

Another tip for growing healthy cucumbers in containers is to water them with an Epsom salt solution once a month. Use 2 tablespoons of Epsom salt per gallon of water and give the plants a good soaking. This way you will give the cucumbers a good malnutrition boost.

Epsom salt contains magnesium and sulfur and it is fully organic. You can check out PreparednessMama’s related post on the amazing uses for Epsom salt around the home and garden.

Unlike tomatoes and cucumbers, kale is extremely easy to grow as it is very tolerant to poor soil conditions and you don’t have to worry about pests and diseases. Kale is also jam-packed with nutrients you’ll want to add to a balanced diet.

For container gardening, choose a variety that is compact. The size of the pot should be at least 8 inches in depth. Sow kale from April through June and harvest it from November through May.

The good news is that kale doesn’t need a fancy potting mix. Anything will do. Before planting add slow release fertilizer to the soil to give the plant a nice nutritional boost. You could enrich the potting mix with some organic perlite, composted bark, or ready-made soil conditioner to boost drainage capabilities.

It is critical to ensure that the soil mix has a neutral pH, as the plat won’t fare well in an acidic soil. Check out my related post on how to measure soil pH without a kit and make the necessary amendments.

Give your kale plants at least 8 hours of light even though kale is pretty tolerant to shade. If you don’t have a sunny spot in your home, invest in a good set of grow lights (pick the full- spectrum ones). Also, fertilize the soil every couple of weeks during the growing season (you don’t need to fertilize the soil in winter, as the plants go dormant).

When harvesting kale, use the cut-and-come-again method and don’t harvest more than half of the mature plant. 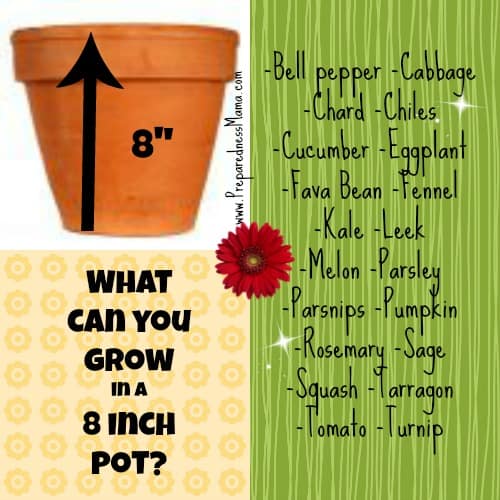 Other Posts in the Planting Depth Series

I hope this post has provided an answer to the question “What one can grow in an 8″ pot?” I’ve given you some handy tips for the most popular plants grown in containers, as container gardening has its particularities which you need to observe for a successful crop.

And don’t forget to check out my other posts from the Planting Depth Series:

Disclosure: Our articles may contain affiliate links. Thank you for supporting PreparednessMama in this way!