Save More, Spend Less and Get Prepared for Any Disaster by  Bernie Carr

This review is by Guest Contributor Christina Wells, who is new to prepping.

If you are new to the whole idea of becoming a “Prepper” as I am, The Penny-Pinching Prepper

is a good resource to have. Author Bernie Carr speaks throughout her book with good authority and doesn’t present any information that she hasn’t already tried out for herself and family. 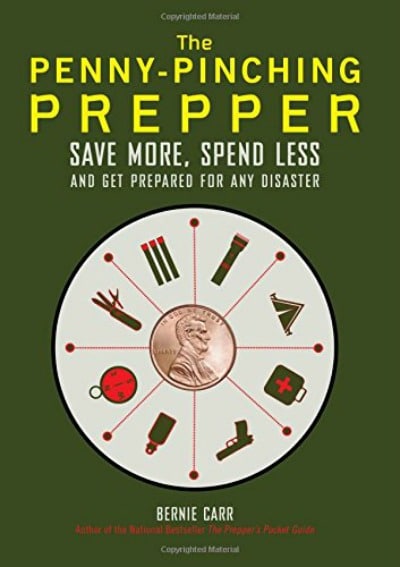 In reviewing the book, I got the sense that Carr and her family live in a way that her book outlines. Always prepared!

The Penny-Pinching Prepper covers a wide range of topics in being prepared, from raising money to start being a prepper, to making things on your own. Carr details how to get out of debt, to lose the clutter or unnecessary things, and to have a garage sale to kick start your prepping.

After going through the entire book and equipping yourself with Carr’s knowledge you get to try things out on your own and find what works best for your situation and family.

One really great thing about The Penny-Pinching Prepper

is that it doesn’t just cover natural disasters, it also takes into consideration break-ins or robberies. Carr goes into detail about different ways to keep your family safe and aware in all types of situations.

Some things that I found particularly interesting were being resourceful with your water. Carr writes from a standpoint of being in the disaster and poses important items to think about including if water was scarce people would probably flock to a local pool, or how do you get your clothes clean in a crisis or disaster.

I also found the chapter on making your own personal hygiene items to be very useful. As a fan of zombie movies and TV shows, I have often wondered about how people in survivalist situations remained looking so clean and how they “took care of business”. Now I know!

I only have one “wish for” in The Penny-Pinching Prepper. I wish that there were more details to help determine how much each project would cost. It would be fantastic if the publisher had arranged them in order – least cost to most cost – using a symbol like a dollar sign or check mark. That way I could plan a budget to complete the easy and inexpensive ones first.

Overall, I think The Penny-Pinching Prepper: Save More, Spend Less and Get Prepared for Any Disaster

is a great resource for those just starting to learn about becoming a prepper, and it’s full of great ideas on how to survive any disaster or crisis that you or your family might face.

About the Author: Bernie Carr became fascinated with survival techniques and self-sufficiency as a child, hearing stories of her father’s adventures in the wilds of Southeast Asia as a land surveyor and avid outdoorsman. As an adult, she developed an interest in emergency preparedness and self-reliance having survived the 1992 Los Angeles riots, the evacuation of her home during the 1993 Southern California wildfires, and the 1994 Northridge earthquake in Calif. She relocated to Houston, Texas, in an effort to avoid more natural disasters, only to arrive in time to encounter the fury of Hurricane Ike in 2008.

She is the creator of the popular website www.Apartment Prepper.com where you can find loads of information about preparing in small spaces.

There are affiliate links in this post. I was given a review copy of The Penny-Pinching Prepper in exchange for my review. The opinions expressed are entirely my own.