This week I’ve asked my daughter to share her favorite homemade cauliflower alfredo sauce. She assures me this stuff is so good, even the grandkids will gobble it up!

Here’s Allison: I am always looking for ways to sneak healthy foods into my children’s diets. It was so much easier when they were little, but now that they are pre-teens with a mind of their own, having them try new things is always a struggle. 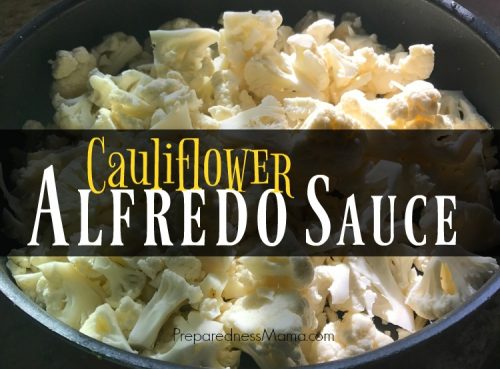 While searching for healthy dinners on Pinterest I started seeing a certain cauliflower alfredo sauce recipe that looked like it might work for us. Chicken Alfredo is one of the meals that all my kids will eat so when I saw this, I was instantly intrigued.

I decided to be sneaky and make this cauliflower alfredo sauce when my kids weren’t home so they would not see me using something healthy. The only time I’ve ever actually seen my kids eat cauliflower is on Thanksgiving day when it is smothered in ranch dressing… so I knew I needed to be sneaky if I this plan was going to work.

I did alter this recipe slightly by adding more garlic. My family loves garlic. I also added more onions when I was cooking it in the pan. The original amount just didn’t look like it was enough.

Ingredients: to make 6 cups of sauce

Cut 2 large heads of cauliflower into pieces. Chop the white onion and place it into a stock pot or large deep frying pan. It doesn’t really matter the size of the pieces you cut them into, you just want to cook them until everything is fork tender. The smaller the pieces, the shorter the cooking time.

Remember, I”m cooking this sauce with my kids gone (just at friends houses on our block) and trying to be sneaky – so they could come home any time and ruin my plan. Also, for me using a white onion was key because once you blend this all together there is ZERO trace of the onion except for the added flavor. My kids are not fond of onions so I need to sneak them in!

Next, add the chicken broth into the pan with the cauliflower and cook it covered until it is fork tender. This will only take 6-7 minutes. Make sure not to strain the liquid out as you’ll use this later in your sauce. I just used a slotted spoon and removed all of the pieces.

I made this recipe in a regular size blender, so it was easier to process in two batches.

Fill a blender with half of the cooked cauliflower/onion mix and approximately a cup and a half of the broth from the pan.

Add about a third of a cup of parmesan cheese, and salt and pepper to taste, and blend it all together.

Now you get to customize the sauce to your taste. If you like a creamier sauce, just add more broth and blend longer. If you want a thicker sauce start with less broth and blend until you get the consistency you like. 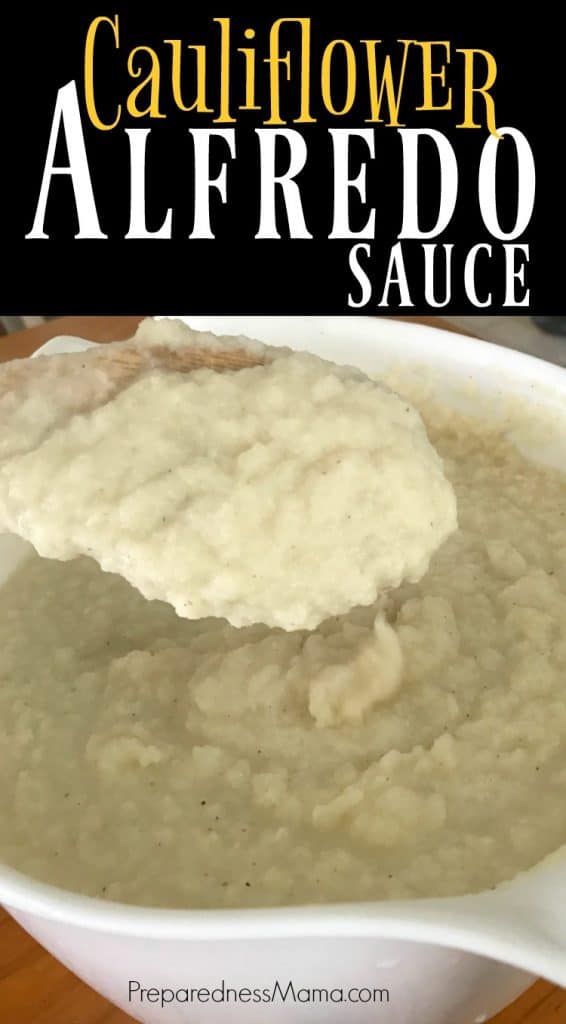 I made sure it was enough to flavor both batches, in all we used 7 garlic cloves. I added an additional amount of salt and pepper, I knew from the first batch that more was needed.

I placed it all in the blender with the garlic and got it to match the consistency of the first sauce I’d made.

After the consistency is right, turn everything into a large pot and mix it all together. It sounds like a lot of steps but from beginning to end, this probably only took me 30 minutes.

One cooking tip – make sure to not overcook the cauliflower. If it is mushy, the consistency of the sauce will be off and you’ll find that the broth and cauliflower won’t want to stay mixed together. Adding more cheese may help that, and I just read online that people who had cooked it too long said their sauce didn’t turn out the same.

My 13-year-old is one of the pickiest eaters I’ve ever met. When he walked in the house after I’d made the sauce he told me that it smelled really good and asked me what was for dinner. He was very excited.

Making this sauce in place of something he already liked really helped me to get him to eat something healthy. I completely fool him! He ate the whole serving he was given, said it was the best he’d ever had. He even had seconds.

I made this again last night and it’s now something all three of my kids request. Yes, I’ve told them that it’s cauliflower and now I can make it while they are home.

Bonus: This sauce freezes wonderfully! If you are going to go through the process of making your own cauliflower alfredo sauce, make enough to freeze for a busy dinner night.

It will last 3 months in the freezer. To thaw, place the frozen sauce in a pan on the stove, add a bit of milk and reheat it on medium until it is as warm you like it.

Score one for mom for the quick healthy eating win! 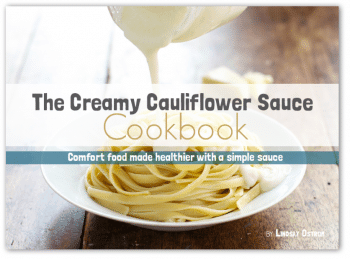 There are affiliate links in this post. Thanks for supporting PreparednessMama in this way!

Looking for other healthy cauliflower dishes? Pinch of Yum has a terrific cookbook with loads of ways to disguise cauliflower in sauces. Check it out! Click here to learn more about The Creamy Cauliflower Sauce Book