…but You Didn’t  Listen 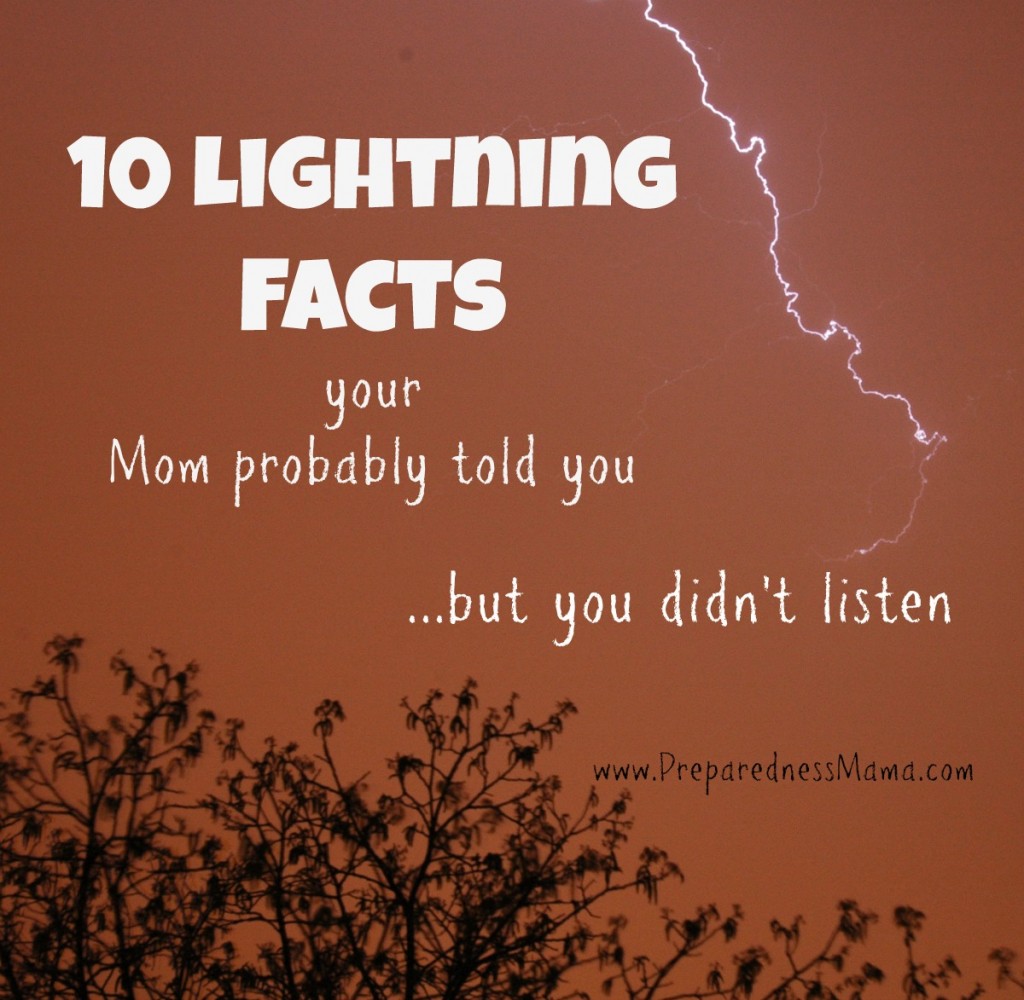 Lightning storms are my favorite. I love the power of them and the noise.  As a child I would run outside to see the lightning and when the rumble came I could count how far away it was. Of course my mother would put a stop to that, IMMEDIATELY, telling me to come inside stating a bunch of “lightning facts” guaranteed to scare any kid into submission.

These scare tactics never worked on me and whenever we had lightning storms my sister would hide inside – while I would try and steal a look out the windows.

Lightning can happen at any time – during snow storms, in hurricane rain bands, in dust storms and forest fires, they are even found in volcanic eruption clouds. We need to think of lightning safety anytime there is a severe thunderstorm in our area.

In the USA, there are several states where you are more likely to run into trouble. Florida leads the list, with double the casualties as the others: Georgia, Tennessee, North Carolina, New York, Pennsylvania, Ohio, Michigan, Colorado and Texas. Each year, almost 24,000 people are killed by lightning strikes around the world and it is the fourth weather killer here at home. Even if you do not live in the 10 states above, you are still at risk.

According to the National Oceanic and Atmospheric Administration (NOAA), there are three main ways lightning enters structures: through a direct strike, through wires or pipes that extend outside the structure, and through the ground.

Fact #1 – Lightning has its own agenda.

Fact  #2 –  Lightning does strike in the same place twice.

It hits the Empire State Building about 25 times a year. Some people are extremely susceptible and everyone should practice lightning safety measures – just ask Roy Cleveland Sullivan (February 7, 1912 – September 28, 1983) who was a U.S. park ranger in Shenandoah National Park in Virginia. Between 1942 and 1977, Sullivan was hit by lightning on seven different occasions during his 35 year career and survived all of them, although he lost the nail on one of his big toes, and suffered multiple injuries to the rest of his body.

Fact #3 – It is dangerous to seek shelter under a tree during a lightning storm.

Your mom is right, trees are frequent conductors of lightning to the ground. Lightning prefers to strike tall, pointed objects. When the strike occurs, the bolt will usually follow the shortest, most conductible path to the earth’s surface. Therefore objects that stick out above everything else are more likely to be struck.

Taking shelters under trees is dangerous – recent studies of lightning victims showed several highly-vulnerable situations and activities, but the one that stood out was taking shelter under trees.

Fact #4 – You should stay in your car during a storm, but not because the rubber tires will save you.

Lightning has traveled through space…a few inches of rubber mean nothing at all. You should stay in your car because it acts like a Faraday cage. The metal in the car will shield you from any external electric fields and prevent the lightning from traveling inside it. If you are in a vehicle during a lightning storm, close your car windows and ride it out. 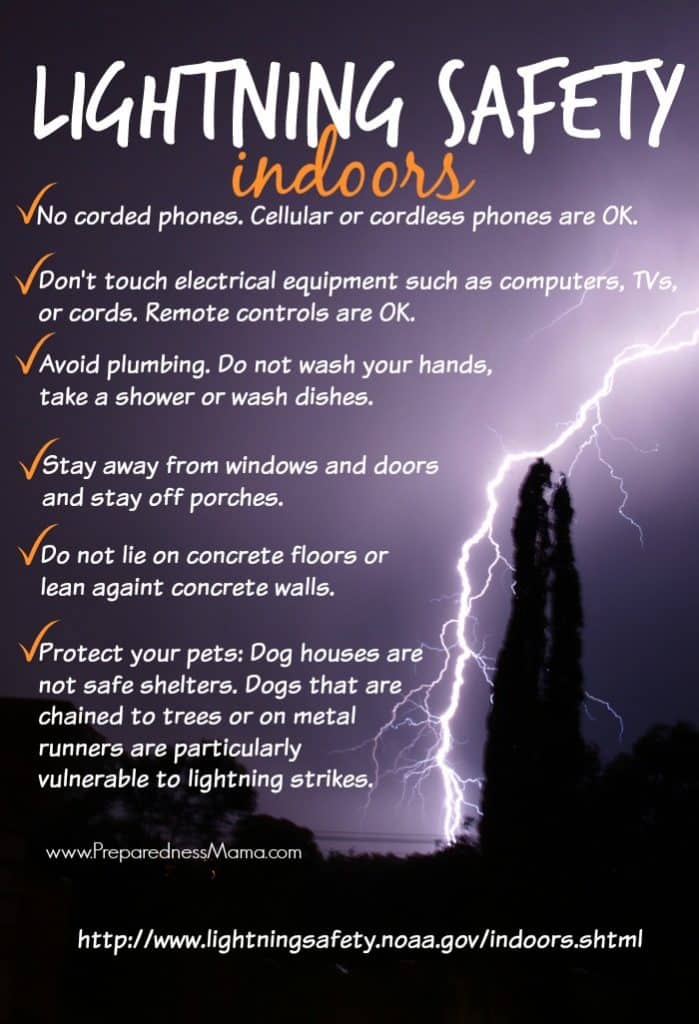 Fact #5 – You can be struck by lightning even if you can’t hear the thunder.

Lightning strikes can occur on a day when you cannot see storm clouds near you. This is known as “A Bolt from the Blue.”  Lightening can travel up to 10 miles but our ears can hear thunder claps from only 6-8 miles away.  To be safe, wait at least 30 minutes before resuming activities after a thunder storm.

Fact #6 – You should not talk on a hard wired telephone during a thunder and lightning storm.

According to Ronald L. Holle, a weather consultant and former meteorologist with the National Severe Storms Laboratory, “Corded phones are extremely dangerous during a storm. Home phone lines are protected with surge devices, but these defenses can be overwhelmed should lightning hit a nearby power pole. Someone dies every few years while talking on a phone during a lightning strike.”

Your cordless phone and mobile phones are safe to use during a thunderstorm. You can safely use remote controls, but do not touch electrical equipment such as computers, TVs or cords;

Fact #7 – You should unplug your computer and other electronic devices before a storm arrives.

It’s a good idea to protect electronic equipment — stereos, TVs, computers, etc. — with surge protectors. Good-quality ones typically cost between $50 and $100. Like the surge protection built into houses, however, they don’t offer 100% protection. Unplugging devices before a storm is your best approach.

Fun Fact #8 – It’s true! Counting between the lightning and thunder clap will tell you how far away the storm is and if it is moving toward or away from you.

Lightning’s distance from you is easy to calculate: if you hear thunder, it and the associated lightning are within range…about 6-8 miles away. The distance from Strike A to Strike B also can be 6-8 miles. Start counting… one one thousand…two two thousand…

Ask yourself why you should NOT go to shelter immediately. A lightning strike at a very close distance will be accompanied by a sudden clap of thunder, with almost no time lapse, and the smell of ozone.

Fact #9 – A lightning victim is not electrified. If you touch them, you will not be electrocuted.

While the human body does not store electricity, it is perfectly safe to touch a lightning victim to give them first aid. This is the most chilling of lightning myths. Imagine if someone died because people were afraid to give CPR!

Call 9-1-1 and if the person has stopped breathing begin CPR immediately. Use an Automatic External Defibrillator if one is available. Contact your local American Red Cross chapter for information on CPR and first aid classes.

If you are caught outside in a field during a thunder and lightning storm, if you feel your hair standing on end, and/or hear “crackling noises” – you are in lightning’s electric field. If you cannot get to shelter you should  follow these steps:

According to Lightning Safety for Organized Outdoor Athletic Events you should evacuate to a safe site if at all possible. SAFE evacuation sites include:

Hopefully you will never need it, but if you know, teach, and apply these 10 lightning safety facts, they will keep you and your family safe during an unexpected storm. Check the National Weather Service page for more lightning safety tips. Have you had any close calls with lightning? Share your stories in the comments section below.