What is your favorite duct tape use?

There are many uses for duct tape these days and the duct tape industry has really done a fabulous job with their marketing. Pinterest boards abound with directions for crafty bags, hair clips and even clothing, all made with colorful duct tape.  There are practical, preparedness duct tape uses to be found on the internet. Today I’m reviewing a new book about the amazing medical things you can do with duct tape. 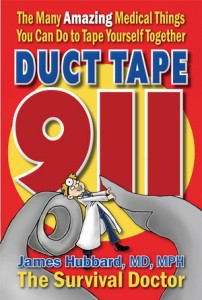 First, some duct tape history. Invented in 1943 by the mother of two navy sailors, and an ordnance factory worker, Vesta Stoutin, created this new adhesive tape for the US military. It was used to seal ammunition cases against moisture.

According to Wikipedia: Stoutin wrote to President Franklin D Roosevelt in 1943 with the idea to seal the boxes with a fabric tape, which she had tested at her factory. The letter was forwarded to the War Production Board, who put Johnson & Johnson on the job. Their new unnamed product was made of thin cotton duck tape coated in waterproof polyethylene (plastic) with a layer of rubber-based gray adhesive (“Polycoat”) bonded to one side. It was easy to apply and remove and was soon adapted to repair military equipment quickly, including vehicles and weapons. This tape, colored in army-standard matte olive drab, was nicknamed “duck tape” by the soldiers. Various theories have been put forward for the nickname, including the descendant relation to cotton duck fabric, the waterproof characteristics of a duck bird,

What is Duct Tape Made of?

Duct tape has three basic layers, molded together to give it added strength. It has a plastic waterproof outside, making it especially handy for makeshift repairs. The middle is made of cloth, allowing it to tear cleanly and evenly. The inner rubber adhesive is what it is best known for. It will stick to anything. If you are allergic to latex you should avoid using it.

How to store duct tape

Have you ever picked up an old roll of duct tape from the garage? Then you will know that it gets really “gummy” after it has been stored for awhile. How long will it last, does it really “go bad”, and how do you keep duct tape fresh if you want to store it for emergency preparedness uses? On the website Octane Creative, The Duct Tape Guys say “There are different qualities of duct tape – the strength is usually determined by the amount of fiber that is in the middle layer. Gorilla tape uses more glue than Duck tape. This has caused problems. When the tape gets warm, the glue gets soft and the tape shifts. This ain’t good.” To extend the “shelf life” of your tape, keep it in a cool, dark, dry area – even the freezer. You can even seal it in a Foodsaver bag. So while the major duct tape maker’s website says that this – use it on everything – product will only last for 12 months, with proper storage you can have it available for years.

Other kinds of adhesive tape

In addition to duct tape, these other adhesive tapes may have a home in your preparedness supplies:

Review: Duct Tape 911 – The Many Amazing Medical Things You Can Do to Tape Yourself Together

I was given a copy of a new book by James Hubbard, MD, MPH, to review. These opinions are entirely my own. Dr. Hubbard says this book is for use – in an emergency – when medical help is not available. I found the book, Duct Tape 911 to be a short (100 pages) but concise treatment of the many medical uses for duct tape. Some ideas he presents are ones that I could probably have figured out on my own, given the time. Others techniques were new to me and in an emergency, as a reference, it is nice to have all these ideas in one place. The 23 chapters are arranged for quick reference and the illustrations are creative and easy to understand.

This book will give you common sense information to use in a medical emergency. If you are not medically trained (me!) the illustrations and simple directions are the best part. Step by step, they will take you through the specific was to use duct tape to bind, brace or repair your medical emergency. As I said, it’s fantastic to have all this information in one place. To get the best use of Duct Tape 911 – read it through, familiarize yourself with the treatments, and then keep the book (and a roll of duct tape) in your first aid or 72-hour kit. I think you’ll be glad you did. What –  Now you’re hooked? Check out these additional duct tape uses from around the web: 10 uses for Duct Tape from the Science Channel 34 Ways to Use Duct Tape for Survival from Backdoor Survival 20 Clever Uses for Duct Tape by Mother Nature Network 25 Uses for Duct Tape by List 25 I asked my readers last Sunday what their non-traditional uses for duct tape were – the most unique? See what they have to say…