Home » Blog » How to Dehydrate Cilantro for a Steady Supply

It’s been a hot summer in Texas with temperatures at 90° and above for months now. That means that I’ve not been able to grow lettuce, spinach, or cilantro in my garden. It’s too darn hot for those cool weather crops. 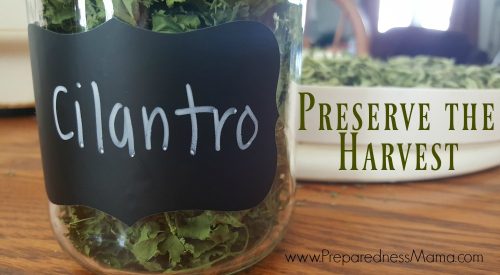 Sometimes though, you just need a bit of cilantro to freshen up a dish.

This week I found a terrific sale on cilantro at the grocery store and even though it’s not organic, at .33 cents per bunch I couldn’t pass it up.

I’m going to dehydrate it for later. That means I’ll be able to have the terrific taste of fresh cilantro anytime I want.

Clean the Cilantro with Fruit and Vegetable Wash

Because I’m not using organic produce I will give a thorough wash with a homemade fruit and vegetable wash recipe that my friend Jennifer at Self-Reliant School makes. It couldn’t be easier.

Jennifer suggests that anytime you are washing greens like spinach, kale, or cilantro that they should be soaked in clear water and with fruit and vegetable wash added. Of course, you could purchase it but this easy recipe using water, vinegar, and baking soda will save a ton of money.

That is exactly what I did with my bunches of cilantro. After they soak for a few minutes, put the leaves in a salad spinner or large dish towel and give it a twirl. You want the leaves to be as dry as you can get them.

Should You Remove the Stems? 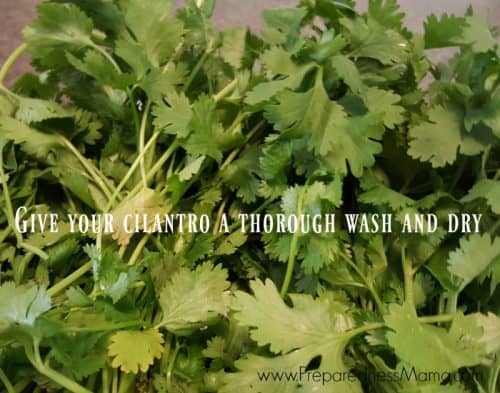 I think that’s a personal preference. Once the leaves are completely dry the stems will be minimal, so you decide what’s best. If you plan to grind the dried leaves into powder, the stems will not make a difference.

I began the process of dehydrating cilantro by removing all of the leaves from the stems, but that got old fast. After one tray was complete I switched gears and ended up removing only the bottom part of the stem for the other trays in the batch.

Once you’ve cleaned and dried the cilantro leaves, lay them on dehydrator trays in a single layer. It is okay to have the leaves touch. They will not stick together when they are dried. 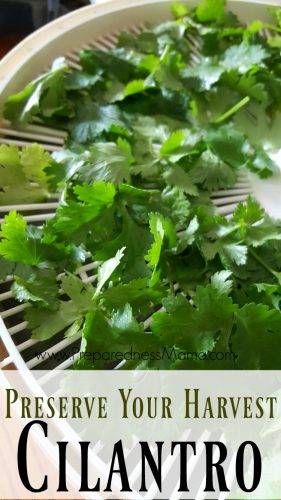 You should process these in your favorite dehydrator at 110° for approximately 1 to 3 hours. They dry fairly quick so keep an eye out. You’ll know they are done when the leaves are crisp and crumble between your fingers.

To store them, place the dried cilantro in an airtight container and keep in a cool, dark, dry location for the best flavor and color. See my post, storing dried herbs for more information about shelf life and containers.

Use the leaves within a year. Keep the leaves whole, they have a longer shelf life than ground herbs. For the best flavor crush or grind the leaves just before using.

Some people say that it’s not worth dehydrating cilantro because it loses it’s flavor when dried, but I disagree. While the flavor may not be as intense as a fresh bunch from the garden, there is still plenty of culinary use for dried cilantro in everyday cooking. You’ll never have to go without cilantro again.

These are some of my favorite dehydrating things from Amazon. When you purchase from my affiliate links I receive a small commission and it doesn’t cost you extra. Not enough to purchase a new dehydrator mind you, but I’ll be able to afford more cilantro to preserve! Thanks for the support.