Do You Let Dandelions Grow in Your Garden?

You know exactly how important it is to have dark, leafy greens as part of your diet. You know the many health benefits associated with kale and spinach and Swiss chard, and you know that the antioxidants in green tea help keep you calm while also preventing cancer. Did you know that there is a fresh leafy green that is considered a weed in most gardens and has also been found to provide tremendous health benefits?  Yes, it’s the lowly dandelion. 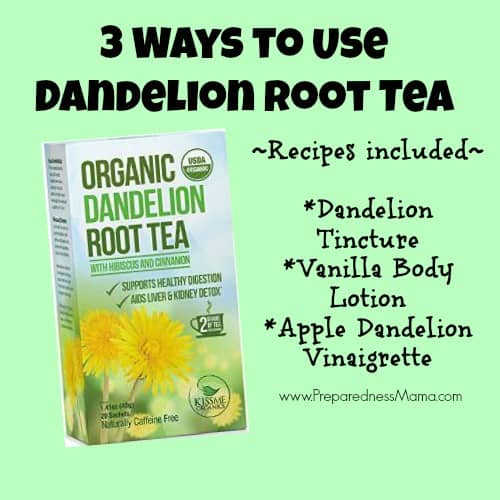 Even though I’ve considered growing them for their health benefits,  I confess that I consider them a weed in my yard. Dandelion is a very hardy perennial. It is just so easy to be overrun with them if you’re not careful. I guess I’m just not that diligent of a gardener.

My answer is simple. I use organic dandelion root tea in my herbal preparations instead of growing my own.

I like to drink dandelion root tea as a coffee substitute and for its health benefits, but it can have a slightly bitter, earthy taste.

The benefits outweigh a bit of bitterness (there is a creamer after all!) Dandelion roots support healthy digestion, kidney health, and liver function. It helps to detox the liver and kidneys from toxins that can build up over time. Healthy digestion helps the body to absorb more nutrients and improve physical and cognitive functions.

When it comes to the dandelion root, roasting is mainly for flavor. Specifically, the roasted dandelion root is ideal for coffee lovers looking to cut down on caffeine. When roasted, dandelion root has a very earthy flavor that is quite similar to coffee.

If you want to maximize the health benefits you want raw dandelion root. The raw version of dandelion root allows you to maximize your intake of cancer-fighting antioxidants and other nutrients that keep your body in optimal shape.

Harvest and Roast Your Own Roots

As a kid, my sister and I were paid to dig up dandelion roots from the front yard. We really didn’t like that job and we never saved the roots, my parents would not even have considered such a thing. Anyone who has tried to dig up a root from the lawn knows how hard it is. Our favorite tool for accomplishing this task was a long screwdriver.

If you do happen to have the plants in your yard and have not sprayed them with chemicals, you may want to harvest your own roots. It’s fairly simple. Even a kid can do it!

Kathie at Homespun Seasonal Living suggests these storage ideas in her post How to Harvest Dandelion Root “Once the root is harvested, it can be used fresh, after a good scrubbing, but for long-term storage, it’s easy to dry. Simply scrub, chop into pieces, and dry in a dehydrator until crisp. Store in an airtight container until ready to use.”

There are many herbal preparations that you can make with dandelion root. Here are three of my favorites.

Besides drinking tea, I make a cooling liver herbal tincture with the herbs found in the tea packets. This recipe comes from my favorite herb book – Rosemary Gladstar’s Medicinal Herbs. From Rosemary “Too much heat in your system? An overly hot condition is indicated by a red or ruddy complexion, agitation, hot temper, and an often ‘fired up’ personality. Heat is good for the body, but too much heat can cause hypertension, heart problems, and liver disorders.”

Chop the herbs and place them in a clean, dry glass jar. Pour enough liquid to cover the herbs by 2 to 3 inches. Cover tightly and give them a good shake. Herbs have a tendency to float, so check and see if you need to add more liquid to reach that 1 to 3 plant to liquid ratio. Place the jar in a warm, sunny spot and let the herbs soak for 4 to 6 weeks. Shake the jar every day or two.

To use: Take 1/2 to 1 teaspoon 3 or 4 times a day for 4 to 6 weeks. Burdock, dandelion, and cinnamon are considered medicinal foods and have no harmful side effects, even over long-term use.

Dandelion root is useful for skin treatments because it contains a rich emollient that is useful in cleaning skin, lotions, and for dry sallow skin.

In a saucepan bring the dandelion root tea/water to a boil and add the borax, simmer until dissolved. Place the mixture in a separate bowl until needed. In the saucepan, over low heat, combine the oils, stirring until the beeswax has melted. Remove from heat and slowly pour the water/borax mixture into the oils while stirring with a wire whisk.

Place your saucepan in a sink or bowl of ice water and continue stirring until the mixture thickens. Add the essential oil and place it into a wide mouth container.

Place all ingredients in a tall sided bowl. Using a whisk or immersion blender, combine ingredients until slightly frothy. Pour over your favorite salad or use it as a marinade for fish or poultry. Makes 2 servings.

I am not a doctor, nurse, or trained herbalist. Just a mom trying to live as naturally as possible. You should do your own research and use your own discretion when using any herbal recipe like the dandelion root tea. There are affiliate links in this post. Thanks for supporting PreparednessMama in this way!

After all the useful features you’ve read about regarding dandelion root tea, let’s see what health benefits you can expect once you start using it regularly.

Dandelion root tea contains a lot of vitamins, minerals and fiber. Vitamin A, C, and K are extremely abundant in dandelion root, plus that the foot also has significant traces of vitamin E. And it also contains small amounts of the B-spectrum vitamins.

Iron, calcium, magnesium, and potassium are some of the important minerals that can be found in dandelion root tea, and it is also rich in carbohydrate inulin – a type of soluble fiber found in plants that supports the growth and maintenance of a healthy bacterial flora in your intestinal tract.

Inflammation is one of your body’s natural responses to injury or illness. Over time, excessive inflammation can lead to permanent damage to your body’s tissues and DNA. Fortunately, dandelion has certain compounds that can treat inflammation and greatly reduce the swelling and pain.

There are two active components in dandelion that may aid blood sugar levels: chicoric and chlorogenic acid. These two compounds can often times improve the pancreas’ work levels so it can produce insulin more efficiently.

Some of the bioactive compounds in dandelion may lower cholesterol, which may decrease heart disease risk. Well, to be fair, the compounds have only been thoroughly tested on animals so far, so we can’t say a lot about their effects on humans. Still, it’s a sign that dandelion root tea might be beneficial if you want to lose some weight and stay in shape.

Dandelion contain high levels of the antioxidant beta-carotene, which is known to provide strong protection against cellular damage and oxidative stress caused by free radicals released by our bodies.