Swedish couple Marie Granmar and Charles Sacilotto are folks who literally live in a bubble. Their home is insulated from the bitter Nordic cold winters as well as the harshness of the other elements all while allowing them to enjoy the best of what nature has to offer. 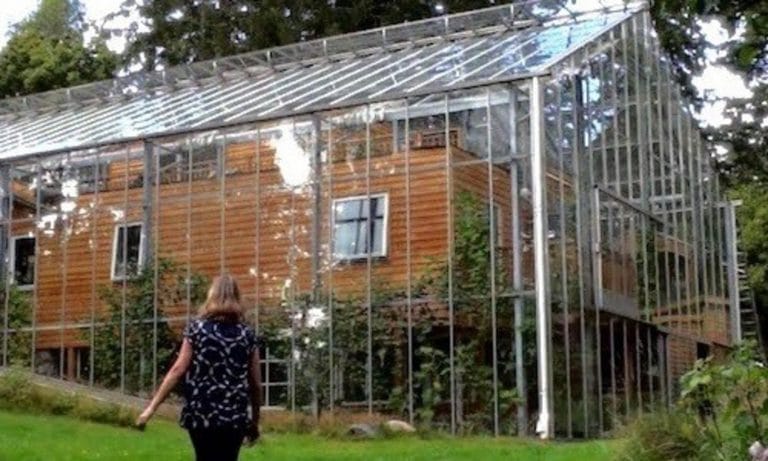 They built their house inside a greenhouse which provides them with plenty off food and heat in the winter.

In Stockholm, Sweeden, where winter lasts 9 months out of the year, the value of this asset cannot be overstated!

For example, the average temperature in Stockholm drops below freezing. But, when you step into Marie and Charles’ bubbled backyard, you’ll notice it’s much much warmer! 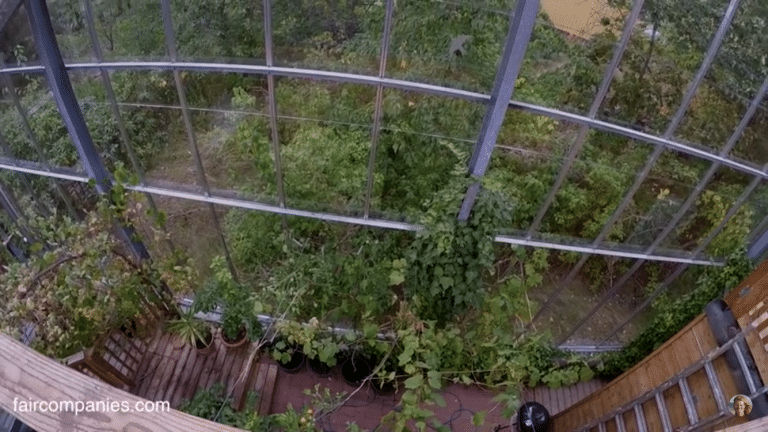 Most families in Stockholm switched on their heaters sometime around mid-September, and don’t turn them off again until mid-May or so, according to Marie.

The greenhouse allows the couple to reduce significantly the number of months they need to heat their home from 9 to 6 months per year, which means they reduce the amount of energy they use as well! Any additional heat they need that the sun does not provide, they get from a wood-burning stove.

Marie claims that they are now more or less immune to the winter blues many of her friends suffer through during the cold winter. Through rain or snow, the couple can sit on their balcony or roof-top terrace and gaze at the stars in complete comfort. 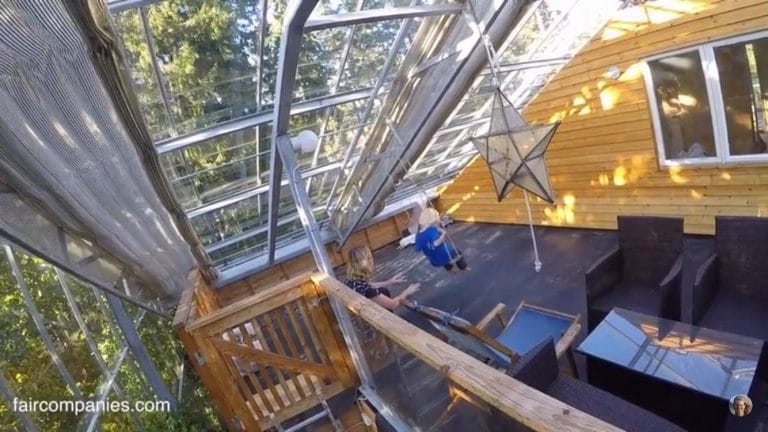 Then, during the warmest periods of the summer, her glass roof automatically opens up when temperatures reach a certain point, to allow the heat out, so it doesn’t become too hot.

“It can get warm a few days in the summer,” she says, “but that’s not really a problem because we open the windows and we enjoy the heat. We like the sun!”

The family loves hanging out on the rooftop deck. Since they built a glass ceiling, they no longer had any need for a roof, so they removed it to create an ample space for reading, gardening, sunbathing, or playing with son on bikes and swings. 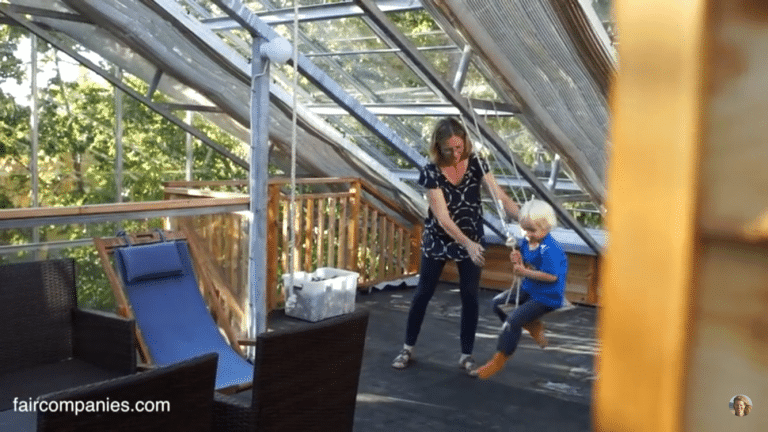 In addition to keeping bodies warmer, the greenhouse also helps stay nice and cozy, which means they get year-round growth.

The size of the greenhouse is nearly double that of their home, which leaves plenty of room for a wrap-around garden. And since they’ve made a Mediterranean climate for themselves. The couple can also grow produce not typically grown in Sweden such as grapes, tomatoes, figs, cucumbers, and herbs. Outside the glass, they also have apple and cherry trees. 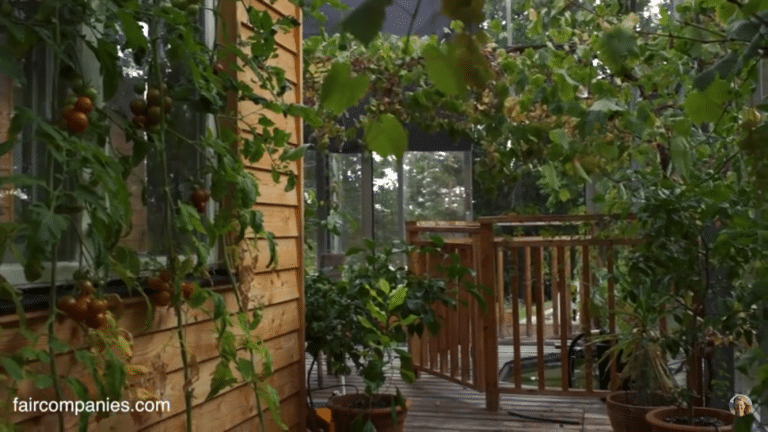 “Growing things here is not easy,” Marie says in the video. “We need all the extra energy we can get.”

On top of the free heat, they also have a rainwater collection system for free water and a composting toilet system that gives them free fertilizer for their plants. And, the plants the thrive in their home, pay them back by cleaning the air and providing more oxygen! 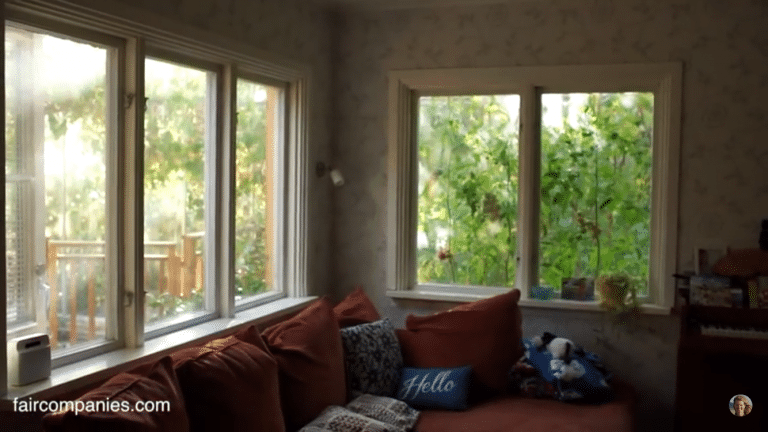 It begins with a urine-separating toilet and utilizes centrifuges, cisterns, garden beds, and ponds to filter wastewater and compost the remains.

The couple’s plans for the future include designing a system to capture extra solar energy during the summer and storing it for the winter.

“If you want to be self sufficient, and not dependent on bigger systems, you can have this and live anywhere you like,” Marie said.

“It’s all a philosophy of life, to use nature, sun and water to live in a another world,” Charles said.

Incredibly, both Charles and Marie were not the first ones to build a house inside a greenhouse. They got their inspiration from Swedish architect Bengt Warne who constructed the first “Naturhus” (Nature House) in Stockholm in 1974. 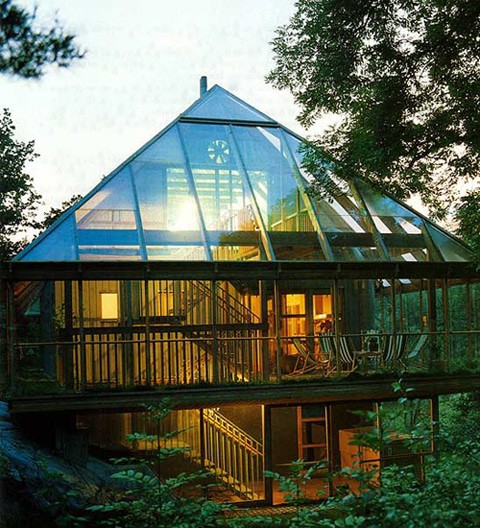 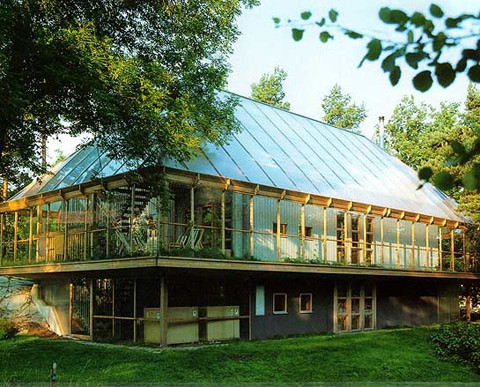 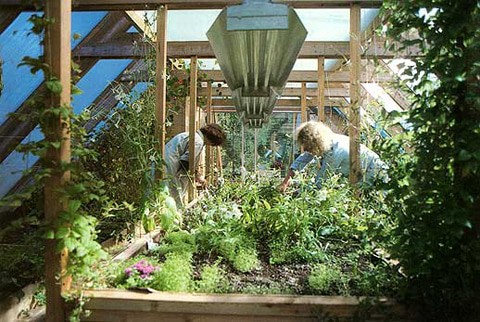 Since that time there have been a handful of others built in Germany and Sweden.