Home » Blog » Cotton May Not Be King for Long, Hemp is Making a Comeback in Levi’s Jeans

Now that hemp just became legal to grow in the United States for the first time in almost a century, Levi’s is doing its part to reintroduce the superplant as a source for clothing to the masses by blending it into its iconic denim. 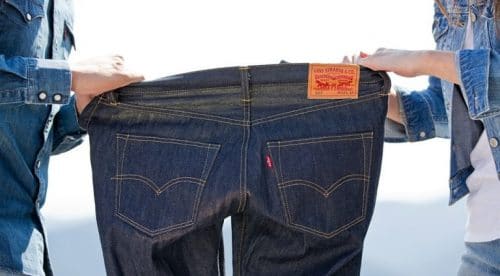 Not many people know this, but Hemp is actually one of the most powerful plants in the world, producing double the amount of fiber as cotton and using far less water and pesticides, plus it’s great for the soil!

Because of the plant’s misunderstood association with marijuana, hemp’s been illegal to grow in the United States for more than 80 years.

Fortunately, for the Amerian people and the planet, Congress finally passed the Hemp Farming Act, which was contained in the farm bill last December, giving American clothing manufacturers a local, and much more affordable source of hemp fiber.

In an effort to re-brand itself as more earth-friendly, Levi Strauss will now be offering jeans made out of 70 percent cotton and 30 percent hemp. While 100 percent hemp would be nice, hey, it’s a decent start.

The company did have a few concerns about how this material would be received by consumers who have become accustomed to the texture of cotton. Hemp can be a bit stiff or rough, like linen.

So Levi’s thought of a way to “cottonize” the feel of it.

“We partnered with fiber technology specialists to create a ‘cottonization’ process that softens the fiber — using very little energy or chemical processing — to make it look, and more importantly feel, almost indistinguishable from cotton,” the company says in a press release.

The cannabis analytics firm New Frontier predicts that the hemp industry’s set to reach 5.7 billion by 2020.

This is fantastic news for the environment, as hemp plants yield twice the amount of fiber per acre compared to cotton, using a tenth of the water, and a lot fewer herbicides and pesticides.

Plus, Hemp can heal our soil by removing harmful toxins from it!

Clothing and other textiles made with hemp are also more durable than cotton, so they can last longer and will need to be replaced far less frequently.