Do You Know What Predators Are Eyeing Your Homestead Animals? Learn How to Recognize and Prepare for 50 Common Animal Predators on the Homestead.

Several years ago we lived on a beautiful, wooded piece of land in the Oregon Cascade foothills. The pine trees were abundant and so were the predators, although the latter were often hard to recognize. After our first snow, we took a stroll around the property and were surprised by the tracks that were left behind. We had no idea that a bobcat was living right above us on the wooded mountainside until we saw the tracks. 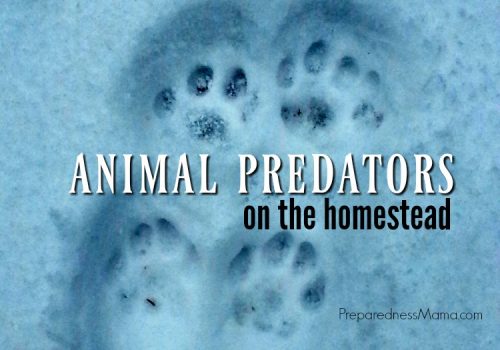 Bobcats prey on small or young livestock, poultry, and pets. They hunt before dusk through the early morning daylight hours, during the fall and winter. They are rarely seen and behave cautiously around humans, but will growl, hiss, or spit if threatened or protecting a kill.

We learned to avoid surprising a bobcat by making noise when we were walking on the property’s outer paths and to remain observant for their signs by looking for claw marks, scat, and tracks.

Dealing with Bobcats in Homes and Yards

There are a few things you can do to deter a bobcat from coming after your chickens or pets:

If you meet a Bobcat, do not approach the animal or run away. Instead, back away slowly from the cat or its kill. Pick up and protect small children. In the rare case of an attack, the bobcat will target the head, neck, or shoulders. Use pepper spray, fight off and hit the cat while trying to protect your head and neck. Make loud noises.

If you want to keep your animals safe, you should assume that they are vulnerable to predator attack. What’s that old saying? An ounce of prevention is worth a pound of cure. Understanding the potential threat and making your animals secure is going to help you win the battle, but where can you learn about the predators that are in your area?

Specific predator information relevant to your area can be found from the natural resource departments in states and provinces, the USDA extension office in your area, and the Ministry of Agriculture in Canada. Also, check with local livestock producers’ organizations. You can also stay informed by talking to neighbors and following local news stories.

The Encyclopedia of Animal Predators

I have enjoyed a new book about animal predators by Janet Vorwald Dohner. She creates an immersive experience as you learn about the potential predators to your livestock, and more importantly, she advocates for a peaceful coexistence with these animals. While your first thought may be to head out with a shotgun, that may not always be necessary. On the dedication page, she states “Dedicated to the belief that, armed with knowledge, we can coexist with animal predators on our farms, on our ranches, in our backyards, and in the greater world we share.”

Ms. Dohner begins the book by breaking it into three sections; first, predators in the modern world.

This section is all about learning which predators are out there and how they can attack your livestock. She arms you with the tools of becoming a junior sleuth in uncovering what killed a member of your flock, and how to protect them in the future.

Second, the predators up close sections is all about, you guessed it, the 50 most common predators that you can be potentially facing in your area.

Dohner goes into the specifics of each animal such as where subspecies are found, how to identify them by their scat, track, and gait. She breaks all the common predators up into their genus, i.e., canines, felines, etc. At the end of the animal’s evaluation, there is a page or two that have what Dohner calls a Damage ID card. It contains information about what the animal typically preys on and when, their track size, how they kill their prey, their gait and scat.

Third, the prevention and protection section which is very important to any homesteader or farmer.

Dohner discusses the pros and cons of different coops, gates, and guardian animals to have and which will work best for the livestock or poultry that you have on your farm or ranch, and she goes in-depth, even to include protection for family pets

What Is Attacking My Livestock? 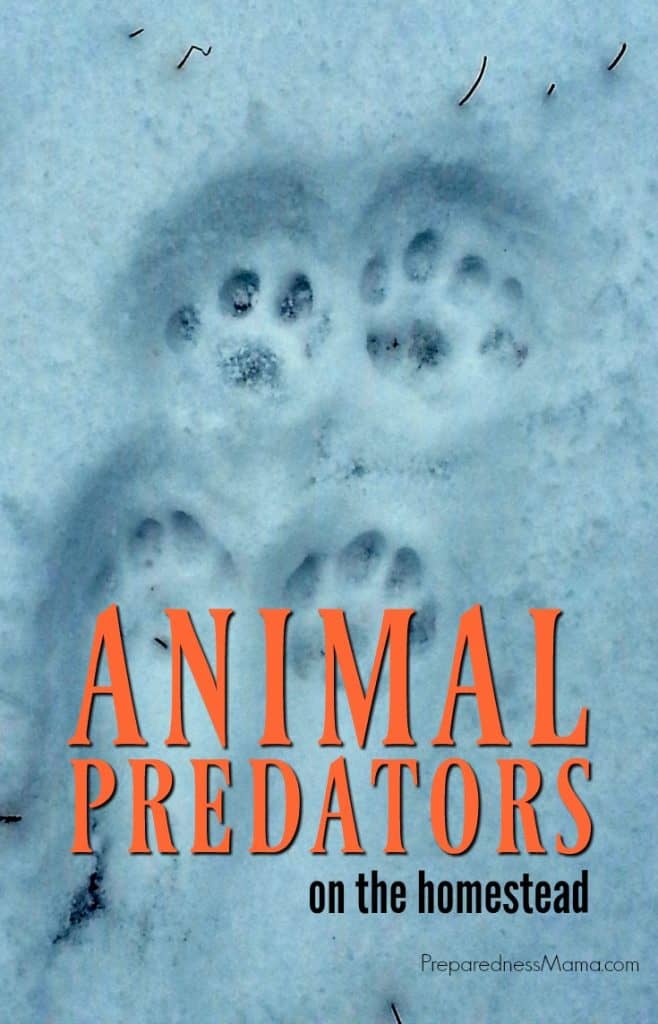 ws you that she is an expert in the field of common predators preying on farm animals. She gives you information that will be valuable in determining what threats are possible in your area. Encyclopedia of Animal Predators has detailed pictures and several pages of information about each predator, showing the differences between the subspecies to help you identify them.

are the Damage ID guides for poultry and livestock. It is a giant check list of all the predators, the time they attack, what’s missing from the animal, evaluating the teeth, talon, or claw marks, and other observations. Brilliant!

This guide arms you with the knowledge of what is hurting your animals and how to better protect them. She also includes what to do when if you encounter a wild animal, how to protect yourself or how to evade harm.

I found this book to be a valuable addition to my preparedness library, and advocate adding it to any homestead, whether urban, suburban, or rural. If you raise livestock, you need to know the risks.

Janet Vorwald Dohner is the author of The Encyclopedia of Animal Predators: Learn about Each Predator’s Traits and Behaviors; Identify the Tracks and Signs of More Than 50 Predators; Protect Your Livestock, Poultry, and Pets

and the book Farm Dogs and Livestock Guardians.

She has 35 years of experience on her small family farm and has relied on livestock guard dogs and corgis to protect her sheep, goats, and poultry. Dohner writes for Modern Farmer and Mother Earth News and speaks regularly on predator control and livestock guardians at conferences. She is a board member of the Kangal Dog Club of America and a member of several learning communities for working dogs.